T.I.'s Daughter Deyjah Harris on Her Virginity After Hymengate Scandal: I'm Not Ready Just Yet

The 19-year-old daughter of the rapper and his ex Ms. Niko answers a question from a fan who wants to know if she is 'still a virgin,' saying, 'It's the last and final time I'll answer this question though.'

AceShowbiz - T.I.'s daughter Deyjah Harris is tired of getting the same question over and over again after the hymengate scandal, though she's learned not to get stressed out over it. The 19-year-old has taken to her Instagram Stories to answer a question about her virginity for the "last and final time."

On Saturday, October 17, Deyjah responded to a fan who wanted to know if she is "still a virgin." Laughing it off, she wrote on her Story post, "bra .. lol .. y'all literally ask me this every time as if my answer is just gonna suddenly change after a week or so."

Deyjah said while she "really didn't even wanna answer" the question, she worried that if she ignored it then people would start making a false assumption about her virginity. "but honestly, f**k it lol. Like who really gives a damn fr fr lol (meaning who gives a damn if y'all think I'm not one anymore, why am I so worried, etc.)," she added, trying to ignore people's opinions on her.

"trust me, it's not gonna just happen by next year of something. I am not ready to do anything like that yet (it's always good to be self-aware so that you know what you are or aren't ready for .. you'll know what you will or won't put up with, you'll know your boundaries, etc.)," she explained. In short, she told her followers, "so i'm gooddd not getting on ya btw lol." 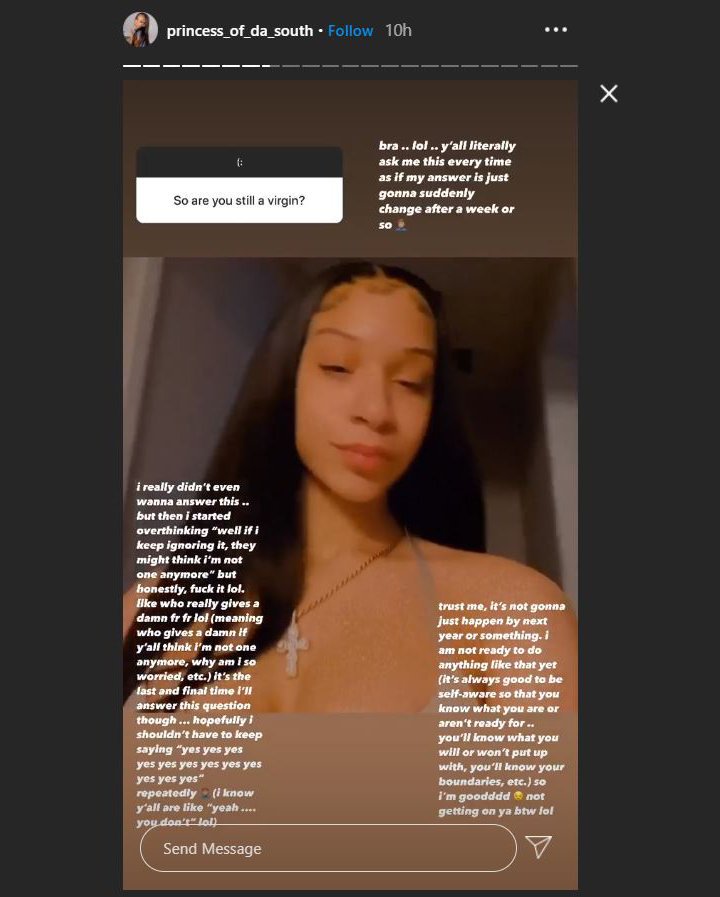 Deyjah Harris answered a question about her virginity.

T.I. sparked a debate earlier this year when he revealed that he takes his daughter Deyjah, whom he shares with his ex Ms. Niko, to the gynecologist every year in order to "check her hymen" and ensure she's still a virgin. The rapper's wife Tameka Cottle a.k.a. Tiny Harris said that her husband has "just being a little more understanding" after the family drama. "It was just him being too honest and sharing too much," she said earlier this month.

Assuring that T.I.'s relationship with his daughter Deyjah is still good, Tiny told ET, "He also spoke to her, apologized to her and was very sincere about it. He felt like he didn't really owe anybody an apology as much as he did her." She continued, "As long as she was perceptive and she understood and was forgiving, he was OK with that. He knew that the rest of the world didn't accept it and wasn't on his side. They were very angry, but the only thing he really cares about is what she feels."

T.I. and Tiny Question Accusers' Credibility as They Hide Identities in Response to New Allegations