After her comment about the series' revival was deemed 'pathetic' by the Maggie Vera depicter, the original star of the supernatural show insists that her criticism was actually directed to the creators.

AceShowbiz - Rose McGowan has insisted her issues with the "Charmed" reboot are with its creators, not its stars, after her response to the revival was deemed "pathetic" by actress Sarah Jeffery.

Sarah hit headlines when she fired back at Rose and former co-star Holly Marie Combs following a recent TikTok event, during which Rose commented that the revival "sucks" and Holly failed to hold back her laughter.

"You know, I saw this earlier and I refrained from saying anything. I thought, better to just let them shout into the abyss. But I do want to say, I find it sad and quite frankly pathetic to see grown women behaving this way," Sarah tweeted.

"I truly hope they find happiness elsewhere, and not in the form of putting down other WOC (women of colour). I would be embarrassed to behave this way. Peace and love to y'all." 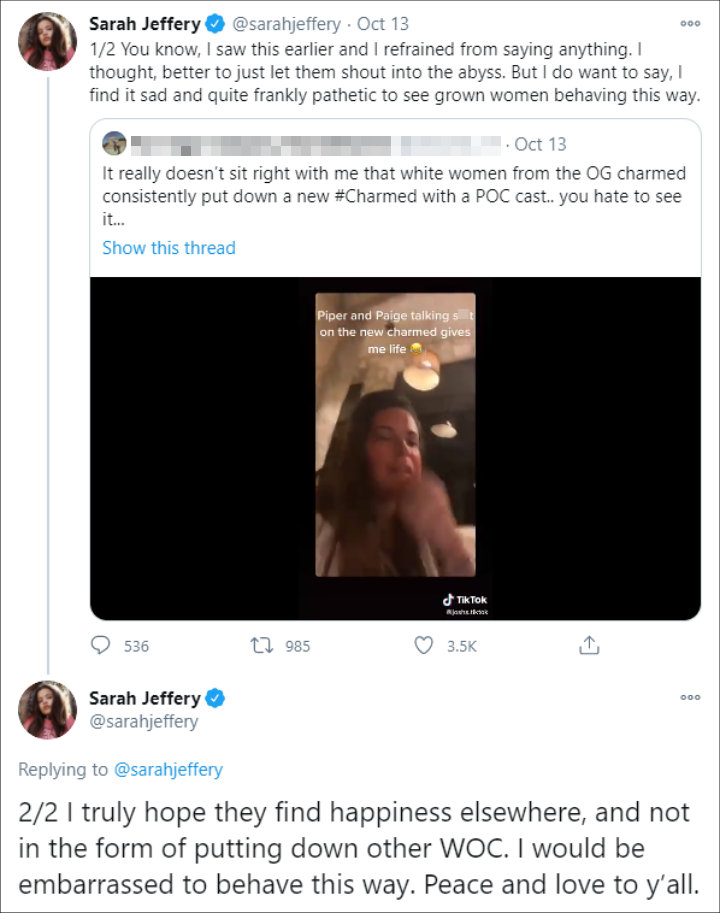 Holly called Sarah's claims "bulls**t" on her Twitter page and Rose weighed in on the controversy in a lengthy statement on her Instagram Stories on Wednesday night (October 14), writing: "Dear Sarah Jeffery, I honestly had no idea who you were til you tweeted. I have been too busy fighting monsters & fighting for a massive Cultural Reset to notice who's in the reboot. Absolutely nothing to do with race, that's quite a stretch you took. I'm beyond glad any WOC has a well paying job. Hell yes to that. I'm sure you are a great actress."

Rose, who played Paige Matthews in the original TV series about three witch sisters, continued: "My quibble (google it) is about execs & producers & @wb network trading on years of my work & name in such a cynical and obvious way - a money grab to cash in on the Charmed name. I do not care that they remade it, I have far bigger things I'm dealing with. I do not nor will I watch a show I disagree with on principle."

"This is not my ego trashing the reboot, this is a criticism of creators (those are the ones who should be embarrassed) with little to no imagination making bank off of years of us busting our a*s to create a legacy that you are actually profiting off of as well." 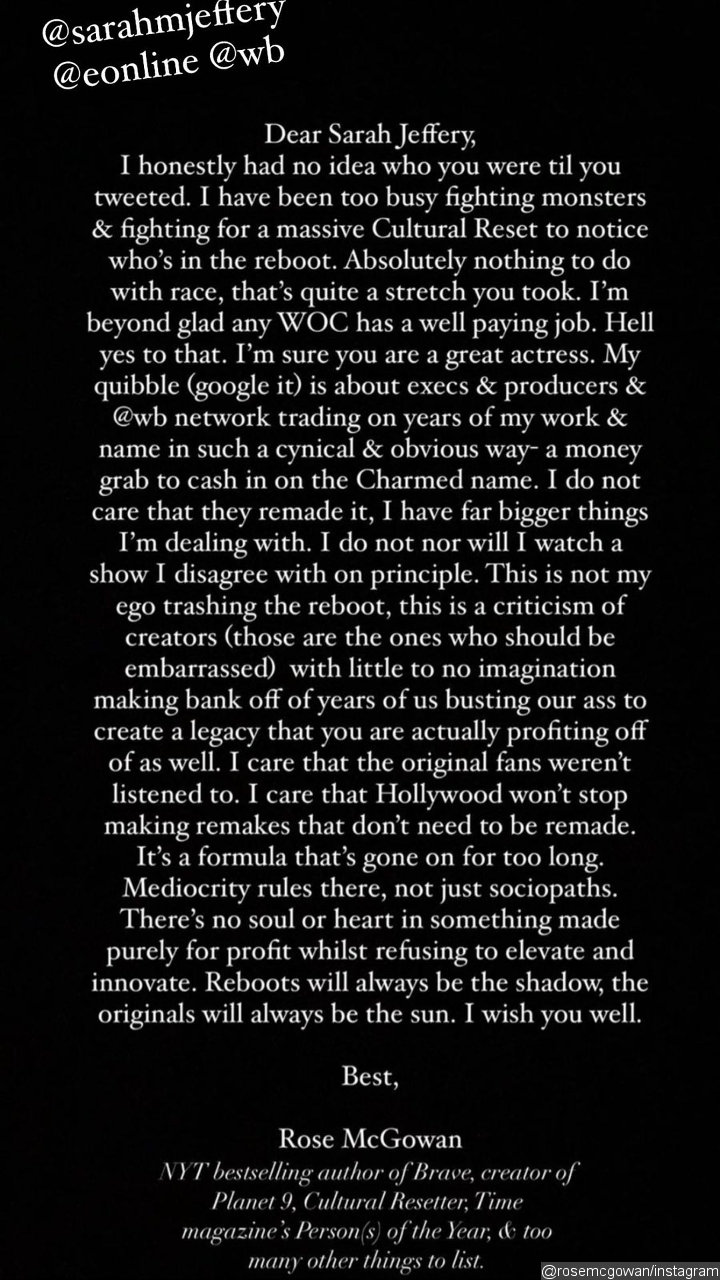 Rose McGowan hit back at Sarah Jeffery when offering clarification to her 'Charmed' comment.

Concluding her post, Rose wrote that she wishes Hollywood would "stop making remakes that don't need to be remade".

"It's a formula that's gone on for too long. Mediocrity rules there, not just sociopaths. There's no soul or heart in something made purely for profit whilst refusing to elevate and innovate. Reboots will always be the shadow, the originals will always be the sun. I wish you well," she finished.