The makeup guru and YouTube star, who landed in hot water earlier this year after his old photos of him engaging in self-harm resurfaced, announces that he's giving back to fans until his 'limit hits.'

AceShowbiz - Jeffree Star is apparently feeling extra generous today. The makeup guru announced on Twitter on Tuesday, September 22 that he's launching a giveaway to "3 random people," simply by following him on the micro-blogging site and retweeting his post about the giveaway.

The 34-year-old Internet personality first teased the giveaway by tweeting, "I've been helping so many people behind the scenes since the #pandemic started and I gave away over $150,000 to my subscribers and customers earlier this year via @CashApp." He added, "Today we continue to give back! Stay tuned."

Several hours later, he returned to the blue bird app with more information about the giveaway, writing, "I'm going to give away $10,000 to 3 random people who retweet this tweet AND follows me! (If you don't follow me, can't DM you the money) Much love."

The YouTube star apparently has had a slight change of heart and decided to give more to those in needs, as he later posted again, "Side note: Drop me your $Cashapp and I'm going to help as many people as I can tonight until my limit hits!" He added, "Thank you for all the support, always." 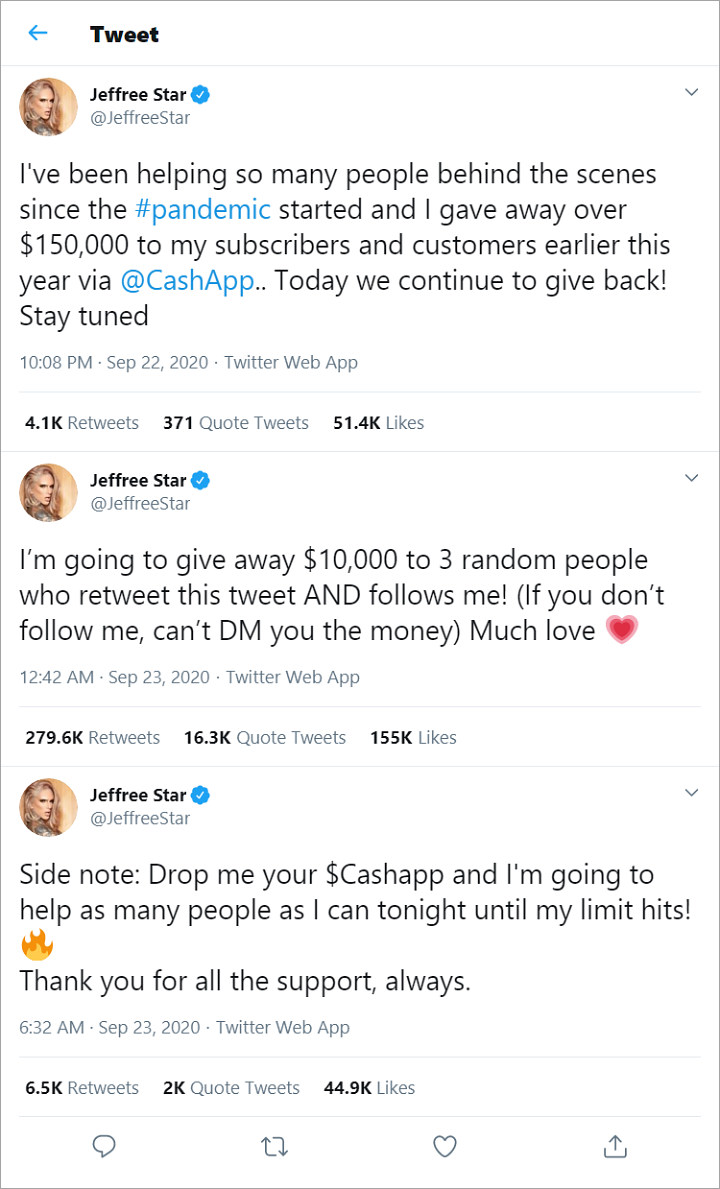 Soon after he posted the giveaway announcements, his followers have been sharing stories about their abysmal conditions and problems in a bid to get financial aid from the makeup artist. "This would be a major blessing, life changing!" one of them wrote. "I am pregnant and struggling. Please help me, I am homeless and pregnant & trying my best to save up for an apartment to get me off the streets. It's been hard. I love you."

Another shared, "My mom lost her job due to the virus. Im Doing this alone As a server so I'm SCRAPING by! My brother turned 9 a few days ago &We couldn't afford to do anything for him. so at this point I'm asking for help $briyamRed heart please anything I'd be so eternally greatful for jeffree."

However, not all of Twitter users were impressed by Jeffree's generous act. Some people have accused him of bribing everyone to forget his problematic past. "Jeffree doing a RT and follow giveaway tells me he lost a bunch of followers and trynna gain them back," one person speculated.

"Bestie Jeffree is trying to bribe and scam this time," another alleged. One other user warned, "Not y'all thinking Jeffree actually doing this to help y'all. Don't be fooled he doing this for himself, he wants y'all to forget about his past." Someone else claimed, "Not Jeffree out here bribing everyone with money so that they can forget his problematic past..."

Some others, meanwhile, blasted those who entered the giveaway after attacking Jeffree and called them hypocrites. "how the same people who made fun of jeffree star 2 months ago and now are entering his $10k giveaway look," one person wrote with a gif of a person dressing as a clown. Another added, "i luv how everyone who was once against jeffree is now Entering his giveaway LMFAKFBSHSH."

Jeffree landed in hot water earlier this year after old photos from his former website "Lipstick Nazi" resurfaced. The website featured swastikas alongside photos of the Jeffree Star Cosmetics founder engaging in self-harm. He was also accused of racism and got embroiled in feuds with several other fashion and beauty gurus, including tattoo artist Kat Von D and James Charles.

Jeffree Star 'Grateful' for Making 'Choice to Heal' by Moving Away From L.A.