The 'La La Land' actress and the 'Saturday Night Live' director fuel speculation that they have secretly tied the knot as they have been spotted wearing gold bands.

AceShowbiz - Are Emma Stone and Dave McCary officially wife and husband now? The pair have added fuel to speculation that they have secretly tied the knot after they were spotted wearing matching rings earlier this month.

In paparazzi photos taken while the Oscar-winning actress and her fiance stepped out in Los Angeles on September 11, both of them were seen sporting a similar gold band each on their left ring finger. The couple kept it casual during the stroll.

The 31-year-old actress sported a white long-sleeved shirt with loose-fitting overalls, Birkenstock sandals and a white baseball cap. She wore a face mask, which was partially removed and only hung on one of her ears. Her rumored new husband, meanwhile, donned a white graphic T-shirt and black pants with dark cap. His face mask was pulled down so that it only covered his chin. 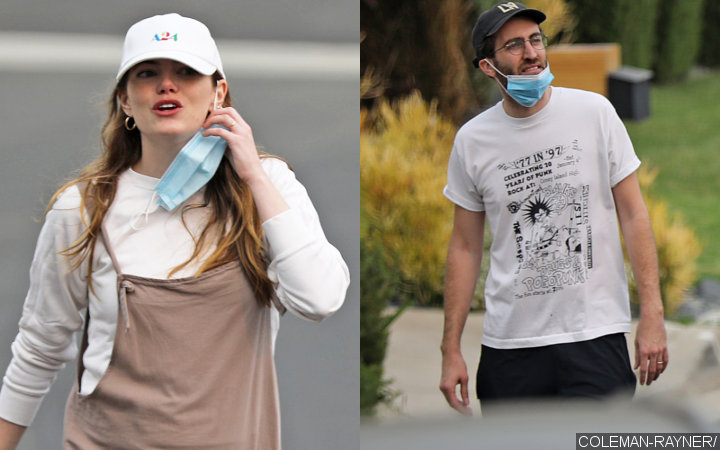 Emma and Dave, who is a segment director for "Saturday Night Live", started dating in 2017. As with the actress' previous relationships, she mostly keeps her romance with Dave low-key, but they couldn't contain their happiness and announced their engagement in December 2019 on Instagram.

In early of this year, it was reported that the pair planned to tie the knot in Los Angeles in March, but the coronavirus pandemic put their plans on hold. In May, rumors sparked that they might have secretly wed after the "Easy A" star swapped her engagement ring, a pearl set in a diamond halo, for a simple gold band during her virtual appearance on Reese Witherspoon's "Hello Sunshine" series.

Emma further hinted on the show that she's a married woman now as she and fellow guest Dr. Harold Koplewicz talked about how anxiety can impact a marriage. "If you marry an anxious man, you're going to have to know me the rest of my life," the psychiatrist joked, to which Stone responded, "Thankfully, I didn't do that."

Teddi Mellencamp Likens Her Exit From 'RHOBH' to a 'Breakup'

Emma Stone Dances Up a Storm for Charity