The president has announced that he will be nominating RBG's replacement in the Supreme Court on Friday or Saturday against her final wish, which he claims to be forged by the Democrats.

AceShowbiz - Donald Trump has once again irked people, this time for disrespecting Ruth Bader Ginsburg's final wish. Despite her wish that no one will replace her position in the Supreme Court until a new president is elected, the 45th POTUS has announced that he will be nominating her replacement either on Friday of Saturday after he attends her funeral this Friday, September 25.

According to NPR, the 87-year-old dictated a statement to her granddaughter Clara Spera days before her death. "My most fervent wish is that I will not be replaced until a new president is installed," she allegedly told her granddaughter before her passing on September 18.

However, Trump is not convinced that those were actually her dying words. He went as far as suggesting that it could be written by the Democratic Congress, pointing his finger at Nancy Pelosi, Adam Schiff and Chuck Schumer.

"I don't know that she said that, or was that written out by Adam Schiff or Pelosi?" he said during a phone call with "Fox & Friends". "I would be more inclined to the second, OK - you know, that came out of the wind. That sounds so beautiful, but that sounds like a Schumer deal, or maybe Pelosi or for Shifty Schiff. So that came out of the wind, let's say. I mean, maybe she did, and maybe she didn't."

Adam Schiff has since responded to Trump's statement, denying that he's got his hands on RBG's final wish. "Mr. President, this is low. Even for you," he wrote on Twitter. "No, I didn't write Ruth Bader Ginsburg's dying wish to a nation she served so well, and spent her whole life making a more perfect union."

He added that he will fight for RBG's wish to come true though, declaring, "But I am going to fight like hell to make it come true. No confirmation before inauguration." 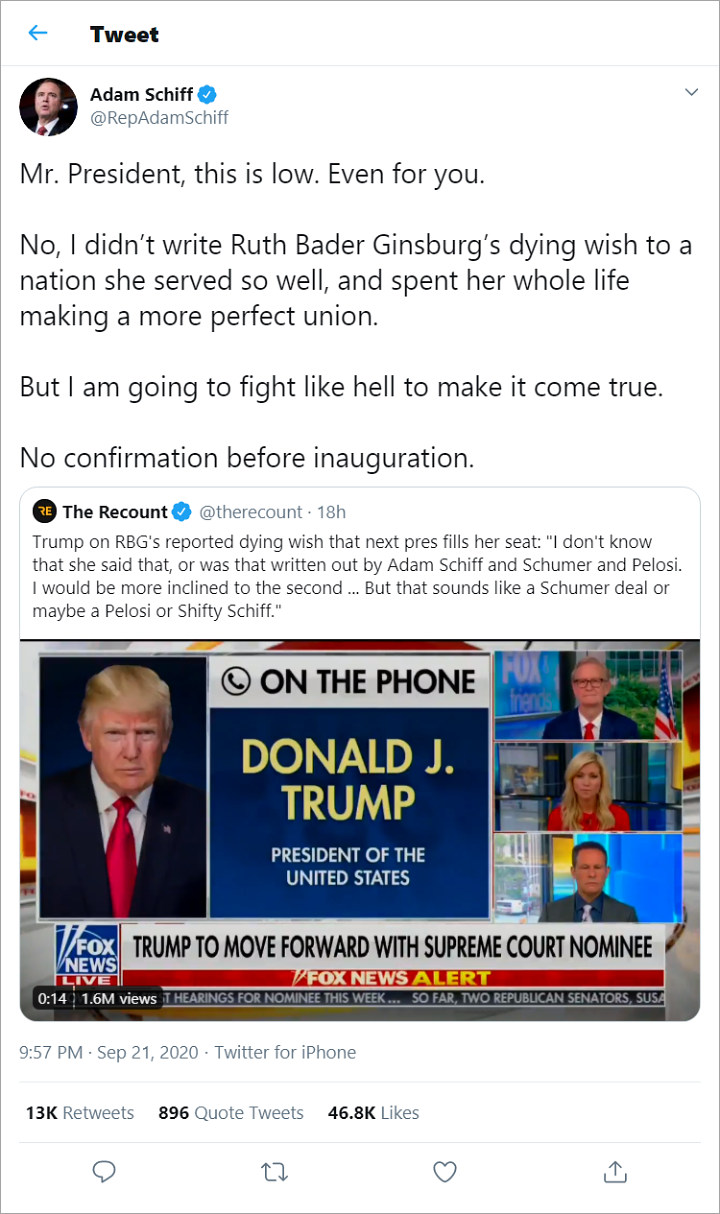 Other Twitter users have since also weighed in on Trump's comment on RBG's final wish, with one expecting "karma coming for him." Another was not surprised by the president's reaction, saying, "Calling RBG's granddaughter a liar is about what you'd expect from Trump."

"We lost count of how many times trump said 'many people are saying' when he was the only person saying it!" a third user accused Trump of making up lies. "We can be sure RBG said it in hopes he would not be reelected. She knew the danger of 4 more years for the courts & our institutions!"

"Shame on @foxandfriends for allowing this to continue and allowing him to desecrate RBG in this way & accusing, as usual with no fact, of her granddaughter lying, that somehow @RepAdamSchiff, @SenSchumer or @SpeakerPelosi had a hand in this? WTF, how do u all sleep at night," a fourth one slammed Fox News for allowing Trump to create this narrative.

Another mocked the former real-estate tycoon, "I bet he literally couldn’t imagine having a grandchild who would pass on a last wish." Someone else slammed him, "This statement by @realDonaldTrump is ghoulish beyond defiling Justice Ginsburg last wishes and her family on Rosh Hashanah (year 5781) A woman who is revered for her brilliance. The soul of Decency in our Democracy!"