The 23-year-old model shares a throwback photo of her and her pregnant sister showing off their respective bellies in what appears to be their family's Pennsylvania farm.

Bella Hadid gets playful when it comes to her post-meal belly. As her pregnant sister Gigi Hadid came closer and closer to her due date, the 23-year-old model shared through her social media account a throwback photo of them showing off midsections, joking to her followers that she too has a bun in the oven.

The daughter of Yolanda Hadid posted the Instagram picture on Tuesday, September 15. In it, she and her older sister could be seen posing side-by-side in what appears to be their family's Pennsylvania farm. "june 11, 2020 … two buns in the oven except mine is from my burger and gigi's is from @zayn, i love you both so freaking much -can'tstopcrying," she wrote in accompaniment of the snap.

Bella's post prompted Gigi herself to send three grinning face and an angle emojis as a response. A number of celebrities also chimed in with Gisele Bundchen raving, "Aww nothing like sisters love!" Lenny Kravitz, meanwhile, jokingly teased, "@bellahadid No that's aunt Sandy's brownies :)," and author Eva Chen enthused, "OMG I was like Yessss I get to babysit two babies but then read caption and a burger baby doesn't count." 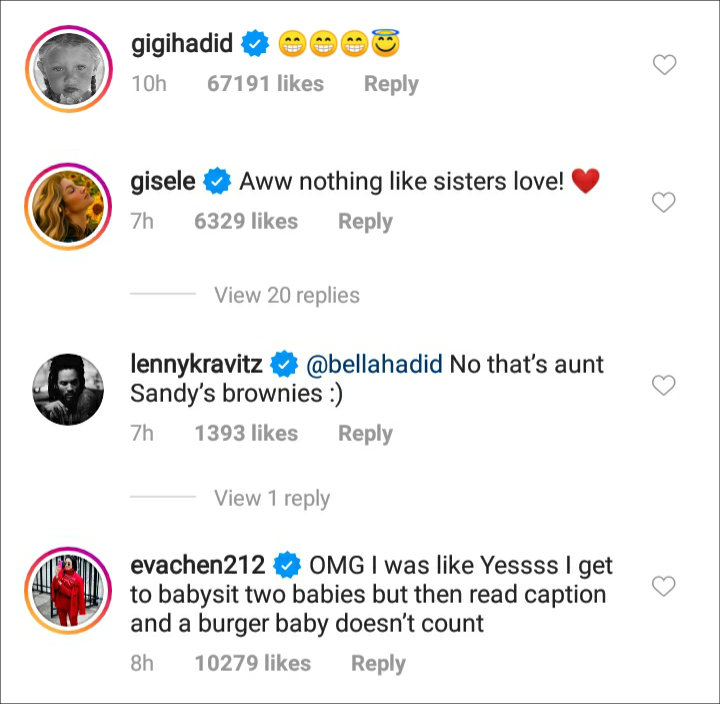 As for Gigi, the 25-year-old offered a pregnancy update in August. Celebrating her first pregnancy, she uploaded a series of gorgeous maternity shoots on Instagram. The first one, captioned "growin an angel :)", captured her cradling her baby bump while resting on her knees, while two others saw her showing off her curves in sheer dress with a simple note that read, "7.26.20."

In a third post released on the same day, Gigi expressed gratitude for the support she was given since she announced her pregnancy. "cherishing this time," she wrote. "appreciate all the love & well wishes, will never forget creating these special images with my friends @luigiandiango @gabriellak_j @erinparsonsmakeup thank you. I love you!"

Rumors that Gigi was expecting a baby with boyfriend Zayn Malik surfaced at the end of April. She later confirmed the happy news during an appearance at "The Tonight Show Starring Jimmy Fallon." She at the time stated, "Obviously, we wish we could have announced it on our own terms. We're very excited and happy and grateful for everyone's well wishes and support."