Even though the country superstar hasn't attended any recent marches, she makes it clear that she supports the movement by saying, 'Do we think our little white asses are the only ones that matter?'

AceShowbiz - Dolly Parton has gained praises for being vocal about her support to the Black Lives Matter movement. In the midst of the ongoing outcry against systemic racism, the country legend got showered with complimentary comments by fans and fellow celebrities alike after she strongly spoke up against white privilege.

The "9 to 5" hitmaker's remarks were quick to set the Internet abuzz with positive feedback. One Twitter user gushed, "Anyone surprised by this knows absolutely nothing about dolly parton, she always has been and always will be a woman for the betterment of all people. My hero." Another one stated, "Always classy in her own way," whereas a third enthused, "OMG, I couldn't love Dolly more."

Dolly Parton gained praise from fans after her support for the Black Lives Matter movement.

Fans were not the only one voicing their admiration over the 74-year-old. A number of celebrities have also approved her bold statement. Among them were "A.P. Bio" actor Patton Oswalt and fellow country singer Trisha Yearwood. Patton wrote, "Me: I couldn't love @Dolly Parton more. (reads @billboard interview). Me: I stand corrected," while Trisha simply tweeted, "I love @DollyParton. That is all." 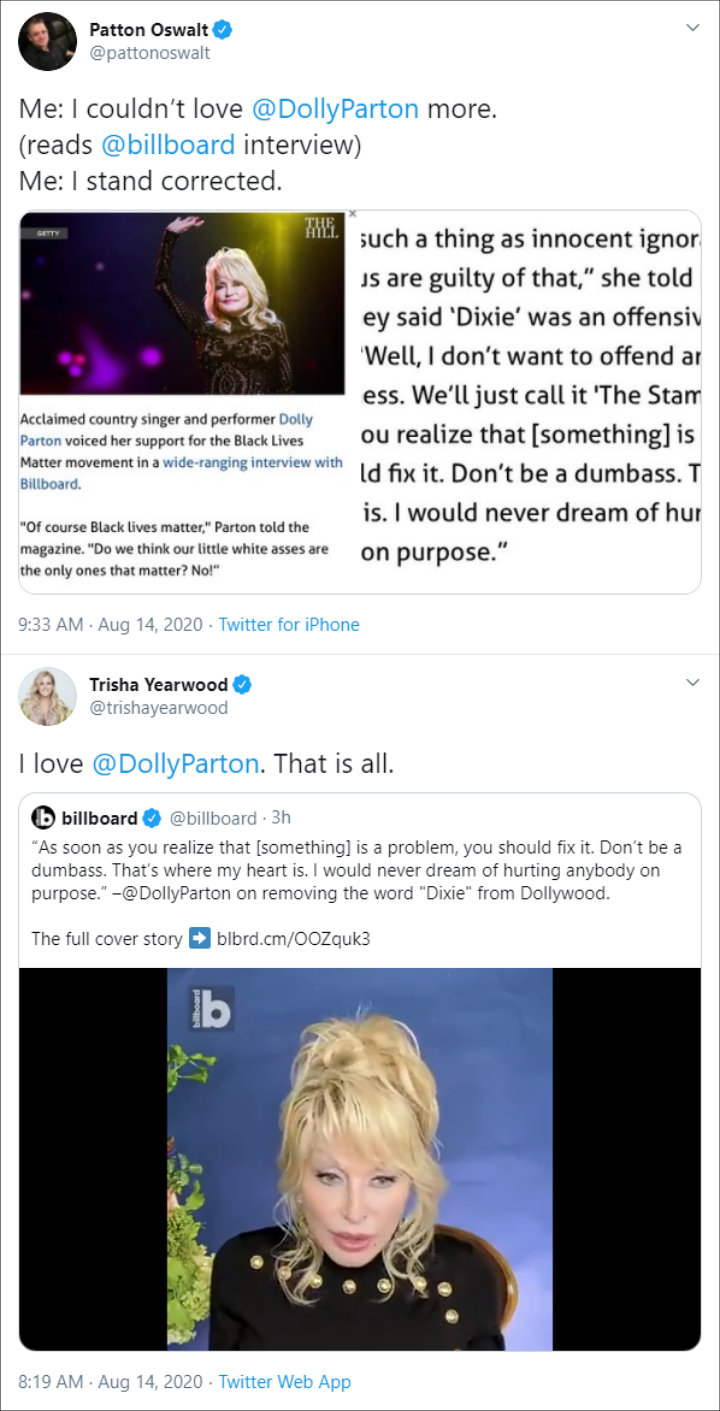 Dolly Parton gained praise from other celebrities after her support for the Black Lives Matter movement.

Dolly has not joined any protests sparked by the tragic death of George Floyd, but she made it clear where she stands in a cover story interview for Billboard. When sharing her thought on the movement, she pointed out, "I understand people having to make themselves known and felt and seen. And of course Black lives matter. Do we think our little white a**es are the only ones that matter? No!"

On what drove her to make the statement, the godmother of Miley Cyrus stated, "First of all, I'm not a judgmental person. I do believe we all have a right to be exactly who we are, and it is not my place to judge. All these good Christian people that are supposed to be such good Christian people, the last thing we're supposed to do is to judge one another. God is the judge, not us." She added, "I just try to be myself. I try to let everybody else be themselves."

During the chat, the multiple Grammy Awards winner also addressed her 2018 decision to drop the word "Dixie" from her Stampede dinner attraction. Acknowledging that she was guilty of "innocent ignorance," she explained, "When they said 'Dixie' was an offensive word, I thought, 'Well, I don't want to offend anybody. This is a business. We'll just call it The Stampede.' "

The "I Will Always Love You" hitmaker went on to stress, "As soon as you realize that [something] is a problem, you should fix it. Don't be a dumba**. That's where my heart is. I would never dream of hurting anybody on purpose."