The celebrity real estate agent wishes that the producer would showcase her gothic winter wonderland-themed nuptials more rather than office drama between her colleagues.

AceShowbiz - Christine Quinn is not afraid of voicing her discontentment with "Selling Sunset". Ahead of the series' season 3 premiere, the Netflix star admitted it was disheartening for her to watch how her wedding was not represented as how it actually was.

Speaking to PEOPLE about the matter, Christine confessed, "I was a little disappointed. It just didn't really showcase the way that it was." She went on to explain, "The wedding was the best day of my life and it was hard for me to watch it on the television show because that's not really the way that I remember it."

The 31-year-old TV personality further expressed her disappointment as stating, "This was my day, and I was just disappointed in the way it was perceived on camera and translated, unfortunately. I'm not going to lie, I was crying when I watched it. I was like, 'This is not my wedding, this is not my wedding.' "

On the reason why she felt that way, Christine suggested that the drama surrounding Chrishell Stause's divorce from Justin Hartley overshadowed her extravagant nuptials. "I understand they wanted to get certain storylines in there, but this was actually my day," she told PEOPLE.

During the interview, Christine also shared her thought on which part of her gothic winter wonderland-themed wedding should be included on the show. "I would have loved some vows. I would have loved a line from me: I talked with all the girls afterward, they congratulated me," she dished.

Proud of what she had accomplished for her wedding, Christine added, "I curated my music very well - I was really happy about that, and I walked down the aisle to 'Sweet but Psycho' by Ava Max, the violin version; I did my bouquet toss to Iggy Azalea's 'Lola'; and I had 'Phantom of the Opera' playing when we were announced as husband and wife."

Some of Christine's fans were quick to offer support via Twitter. "Just from reading about how amazing your Wedding was + seeing how beautiful, detailed, and luxurious you always are with presentation, I 100[percent] understand why you would be disappointed about this. I would feel the same way. Can't wait to watch the new Season tonight," one wrote, while another said, "Oh no! I am so looking forward to tomorrow. I hope you still had an amazing day??" 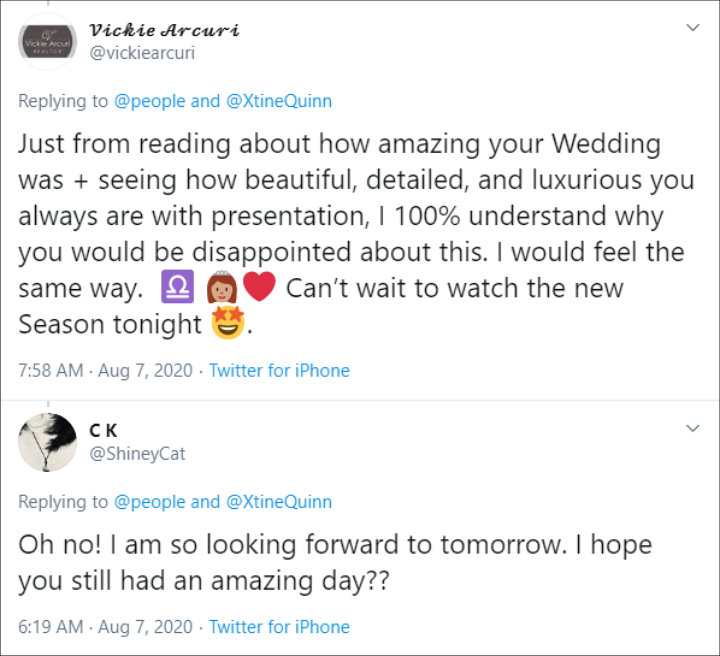 Christine Quinn received support from fans after voicing her disappointment at 'Selling Sunset'.

Despite her disappointment, Christine accepted that there was nothing she could have done as she stated, "It is what it is." To appease her displeasure, she made use of her Instagram account to share a sneak peek into her December 2019 wedding to Christian Richard.

The third season of "Selling Sunset" will be available on Netflix on Friday, August 7.

Christine Quinn Ready to 'Bury' Her 'Character' From 'Selling Sunset'

Christine Quinn 'Absolutely' Wants to Have Another Child