Responding to rumors that she's expecting another child with her husband Ben Seewald, the 'Counting On' star clarifies that 'there's no baby behind the bump.'

AceShowbiz - Jessa Duggar is not expecting a fourth child with husband Ben Seewald. The "Counting On" star has set the record straight on the swirling speculations among fans that she is hiding a baby bump in a recent Instagram photo, blaming it on "tacos."

The talked-about photo itself was posted by the 27-year-old on Instagram in late July. It saw her wearing a loose dress while pushing her 14-month-old daughter, Ivy Jane, on a swing. It was not until days later, however, that a fan asked her about whether or not she is expecting again.

On Saturday, August 1, Jessa shared a photo collage of her 3-year-old son, Henry, getting a new haircut. In the comment section of the post, a fan inquired, "Will you announce your fourth pregnancy soon?" The fan additionally pointed out in the same comment, "Noticed the bump."

In response to the fan's question, the former star of "19 Kids and Counting" hilariously shot down any baby speculation by writing back, "There's no baby behind the bump - only tacos." Adding laughing-crying emoji in her reply, she added in the end, "Thanks for asking."

This was not the first time Jessa was hit with pregnancy rumors. In mid-July, her Instagram video that saw her children playing in the background as fireworks with blue smoke were set prompting fans to think that it might be a gender reveal party.

"I saw blue smoke and assumed it was a gender reveal. Your kiddos are the cutest," one fan in particular commented on the video. As a response, the mom-of-three jokingly replied, "Ha. Thought about captioning this 'It's a boy!' " 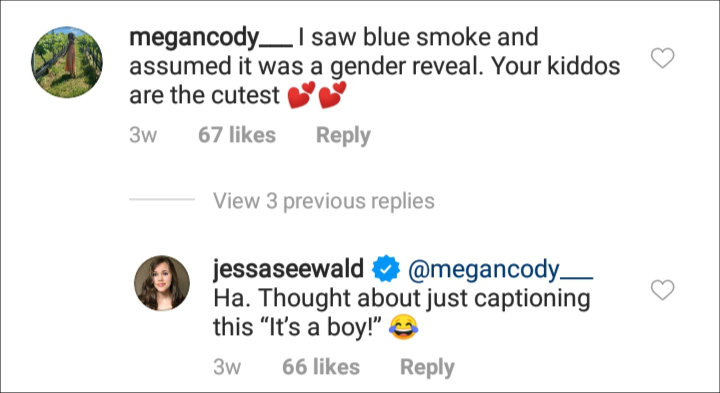 Jessa Duggar joked with a fan that she is expecting a baby boy.

Though she shot down rumors about her fourth pregnancy, Jessa has previously admitted that she and her husband were "considering" adoption. "We're not sure if our next baby will be adopted or not, but that's something that has weighed heavily on our hearts since before we were married," she told Us Weekly.

Her husband, Ben, shared similar sentiment. "We could wait until all of our kids are grown and gone and then adopt, but I also think it's kind of cool to have an adopted child growing up with the other kids," he said. "We're just in a stage of, like, meeting with people who have adopted and getting advice, hearing their stories and seeing what that might look like for us."

Jessa and Ben got married in November 2014. Together, they shared three children together, Henry, Ivy Jane and 4-year-old Spurgeon.