Hinting that a certain issue drives his decision to make the announcement, the 'XO Tour Llif3' hitmaker follows up the initial tweet with a picture of him rocking an American flag sweater.

AceShowbiz - Lil Uzi Vert is the latest celebrity to throw his hat into the political ring. Following in the footsteps of Kanye West, the Philadelphia-born star took to Twitter on Tuesday, July 21 to announce that he's running for president.

The 25-year-old rapper didn't go into detail about his goal, but he hinted that a certain issue has driven his desire to make his voice be heard. "IM TIRED OF THIS ..... IM RUNNING FOR PRESIDENT," he tweeted, adding, "VOTE FOR BABY PLUTO."

Lil Uzi Vert quickly followed it up with a photo showing his patriotic side. In the picture, he sported an American flag sweater with a matching backpack as he sat in a private plane. "Vote for Baby Pluto," he repeated his plea. 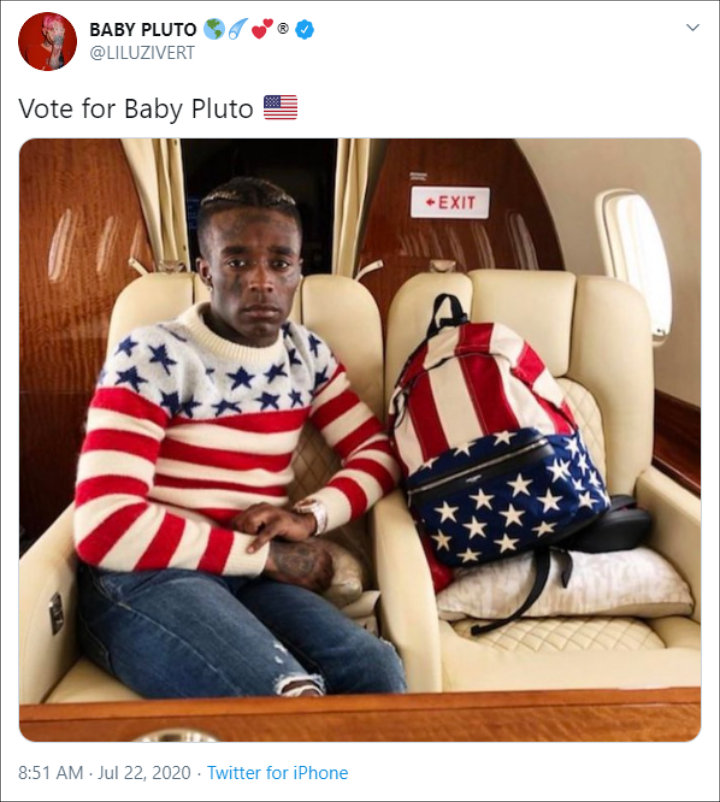 Responding to his announcement, one person wrote below his announcement, "AYE LIL UZI THE STREETS HAVE YOUR BACK MY HOOD HAS BEEN ON UR MUSIC FOR A GRIP JIT." Another commented, "LETS GOO UZI YESSIRRRR." Comparing the "XO Tour Llif3" rapper to Kanye, a third user declared that he/she would chose "Uzi over kanye."

Some others took Lil Uzi Vert's announcement seriously and reminded him that he didn't meet one of the requirements to be a president of the United States. As directed by the Constitution, a presidential candidate must be a natural born citizen of the United States, a resident for 14 years, and 35 years of age or older.

"You don't meet the age requirements," someone told the Roc Nation artist. Another similarly pointed out, "He not old enough." Another remains optimistic that Lil Uzi Vert would be eligible for it, responding to the critics, "Then he's gonna be the youngest."

Some of his fans, however, think that his tweet and the following image are teasers of what he has been cooking up with Future. In a recent clip on his Instagram page, the two stars engaged in discussion about the ongoing COVID-19 pandemic and how it's been affecting profits.

Further convincing his followers that his presidential bid announcement was just a marketing ploy, he wrote in a now-deleted tweet," In lieu of additional info, it's only right to join in on the stokedness brought about the impending arrival of something new from Uzi and his recent 'Wassup' collaborator."