The caption of the tweet that the Young Money female emcee likes reads, 'Congratulations, Tom Holland. You're going to be an amazing father to little Tony.'

AceShowbiz - Ever since Nicki Minaj announced her pregnancy, not only her name started trending on social media, but also Tom Holland. Many people started joking that the Young Money femcee is expecting a child with the British actor, and it looks like Nicki herself has caught wind of the running jokes.

It was all thanks to a news publication that made a story about the jokes and shared it online. In the caption of the post, the publication even joined in the fun by saying, "Congratulations, Tom Holland. You're going to be an amazing father to little Tony," most likely referring to the relationship between his Spider-Man and Robert Downey Jr.'s Iron Man. Much to anyone's surprise, Nicki liked the tweet. 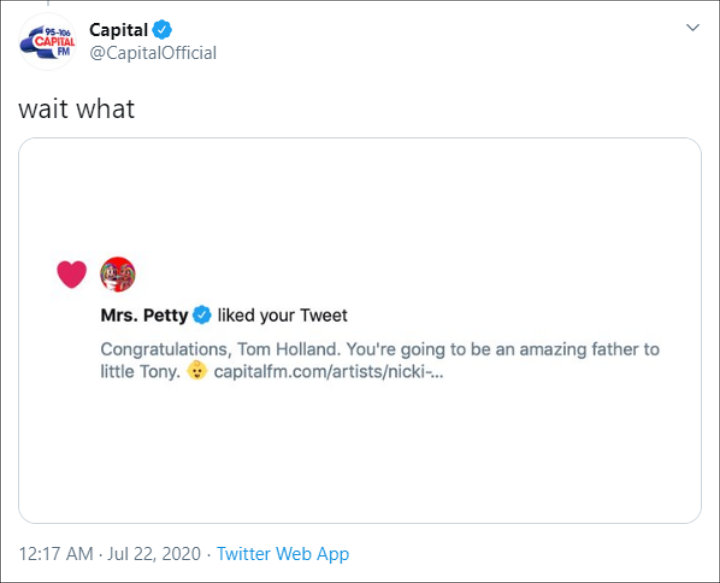 Her social media move unsurprisingly drove a lot of people wild. "OMG SHE NOW KNOWS ABOUT THIS JOKE, NOW ITS TOM HOLLANDS TURN," one said, as some other people jokingly said that Nicki confirmed Tom is really her baby daddy. "LMAOOOO she plays too much," another individual reacted as one other hoped that she would include this joke on her new song.

For your information, the whole Tom Holland and Nicki Minaj joke stemmed from a meme created in April 2019 depicting a love triangle between the "Bang Bang" rapper, the "Avengers: Endgame" actor and YouTube star James Charles. The original clip that went viral saw a fan adding fake subtitles of Nicki and Tom professing their love for one another.

Nicki announced her pregnancy on Monday morning, July 20, sharing a series of photos of her cradling her baby bump. "#preggers," so the "Starship" rapper captioned one of the pregnancy shots.

The unborn baby will be her first child with her husband Kenneth Petty, whom she married last year after more than a year of dating.