Back in June, 'Boys Meet World' star Danielle publicly apologized to her former co-star on her Twitter account, writing, 'I owed @realtrinamcgee an apology for being rude, cold, and distant when she guest starred on GMW.'

AceShowbiz - "Boy Meets World" star Trina McGee received apologies from her co-stars after she called them out for racism when she guest starred on the revival series. In a new interview, Trina talked about Danielle Fishel, who was among those who reached out to her to apologize.

Recalling how Danielle treated her at the time, Trina revealed to Yahoo Entertainment in a recent interview, "Danielle decide to be really tight and not talk." However, it was all in the past as Trina added, "We did discuss it recently, because she called me to apologize. She was going through a lot at the time on a person level."

"My relationship with her right now is decent. We're very complimentary of each other," she added. "She goes out of her way to say, 'Hey, are you OK?' She actually just sent me a cute picture of her baby... so I'm not trying to hang around and have a grudge against the girl or anything, I'm just slowly trying to take steps to trusting."

Back in June, Danielle publicly apologized to Trina on her Twitter account. "I owed @realtrinamcgee an apology for being rude, cold, & distant when she guest starred on GMW (her tweet regarding warm hellos being met with cold blank stares was about me). Trina and I spoke over a month ago and she gracefully accepted my apology," she wrote at the time. 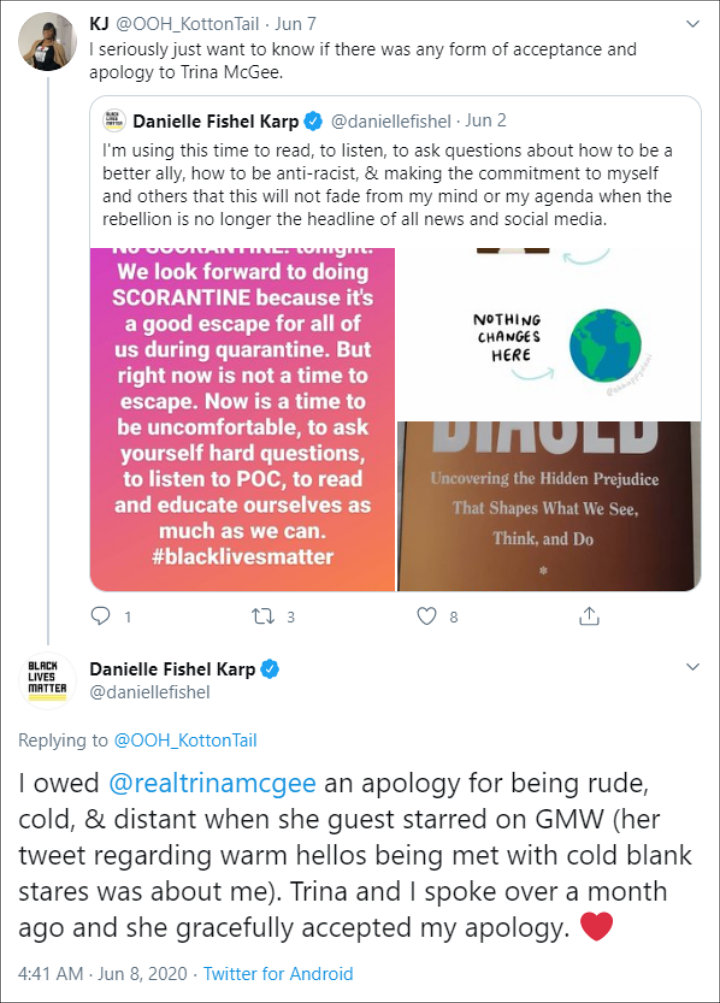 In a series of Twitter posts in April, Trina exposed her co-stars' racist behaviors, such as calling her "aunt Jemima on set during hair and make up." At other moments, the Angela Moore depicter claimed she was "called a bitter b***h when I quietly waited for my scene to finish rehearsing that was being f'ed up over and over due to episode featuring my character. Told 'it was nice of you to join us' like a stranger after 60 episodes."

Trina later revealed that she was talking about the main cast, including Will Friedle, Ben Savage and Danielle. Later, Trina shared on Instagram that Will "apologized to me 22 years ago and again days ago in a in a three-page letter. We talked more on it and he acknowledged that he really wasn't educated enough in his early twenties to know he was truly offending me."

She appreciated Will's apology as she stated, "Will apologized to me and I forgave him, I then apologized to him for making the statements public because his joke came out of just not knowing, not viciousness and he forgave me. That's what friends do."