In some photos that circulated online, the missing actress' ex husband and father are seen swimming the lake, which is about 60 miles northwest of central Los Angeles, while fully clothed.

AceShowbiz - It's been days since Naya Rivera went missing at Lake Piru. While the search for the "Glee" alum is still underway, her family decided to personally join the search in hope that the actress would be found faster.

In some photos that circulated online, Naya's ex Ryan Dorsey and father were seen swimming the lake, which is about 60 miles northwest of central Los Angeles, while fully clothed. The pictures also saw the "Blood Father" actor, who shares son Josey with Naya, getting emotional as he cried while covering his face.

"Naya Rivera's Ex Husband Ryan Dorsey at Lake Piru. Heartbreaking. I can't imagine the pain they are all going through," a fan wrote on Twitter alongside the pictures. 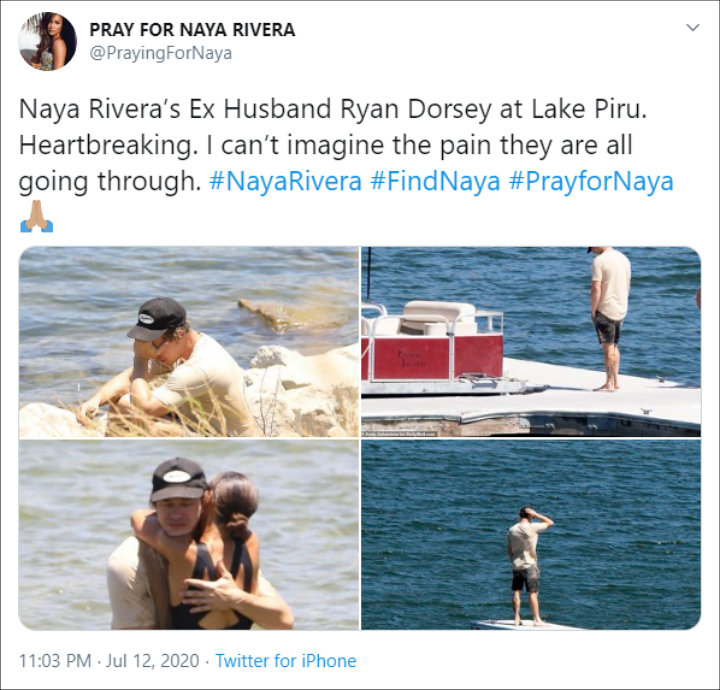 Another account, meanwhile, shared a "devastating" picture of "Naya Rivera's father swimming in Lake Piru to try and recover his daughter." He could be seen donning a black tee while swimming in the waters of Lake Piru.

"Naya's mother and brother have been at the lake every day since Naya disappeared," a source revealed to PEOPLE. "They have been in constant contact with the Sheriff's Office and involved in the search. On Saturday morning, they joined the search on a sheriff's boat." 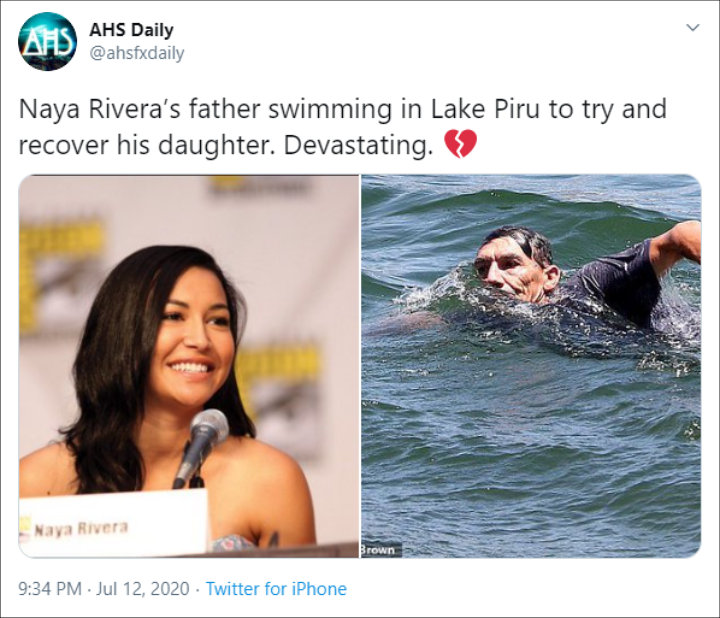 In an update on day 4 of the search on Sunday, July 12, The Ventura County Sheriff’s Department shared on Twitter, "In today's search for Naya Rivera, cabins and outbuildings in the surrounding area will be checked once again, as well as the shoreline. This has been part of the ongoing search effort since her disappearance on Wednesday afternoon. Boat crews continue to scan the lake."

Naya went missing on Wednesday, July 8 after taking a boat ride on the lake with her four-year-old son Josey. While he was found on the boat three hours later alone, Naya never made it back to the vessel. As rumors continued to swirl online that it could be a suicide, Sgt Kevin Donoghue ruled out the possibility. "We interviewed her son and there was nothing that we learned from her son that would have suggested that this was suicide," he said. "Everything that we've learned so far leads to this being some sort of water recreational accident."