The 'Stronger' rapper releases 'DONDA', which is presumed to appear on his forthcoming album 'God's Country', in loving memory of his mother who passed away of cosmetic surgery complications.

AceShowbiz - Kanye West paid tribute to his late mother Donda on Sunday, July 12 with a new track, vowing to "end racism once and for all".

The rapper took to Twitter to debut the tune, titled "DONDA", which is dedicated to his mum, who passed away in 2007 of complications from cosmetic surgery at the age of 58. The song is presumed to appear on Kanye's forthcoming album, "God's Country".

"In loving memory of my incredible mother on her birthday," tweeted the 43-year-old rapper, who uploaded a coinciding music video featuring footage from his childhood. 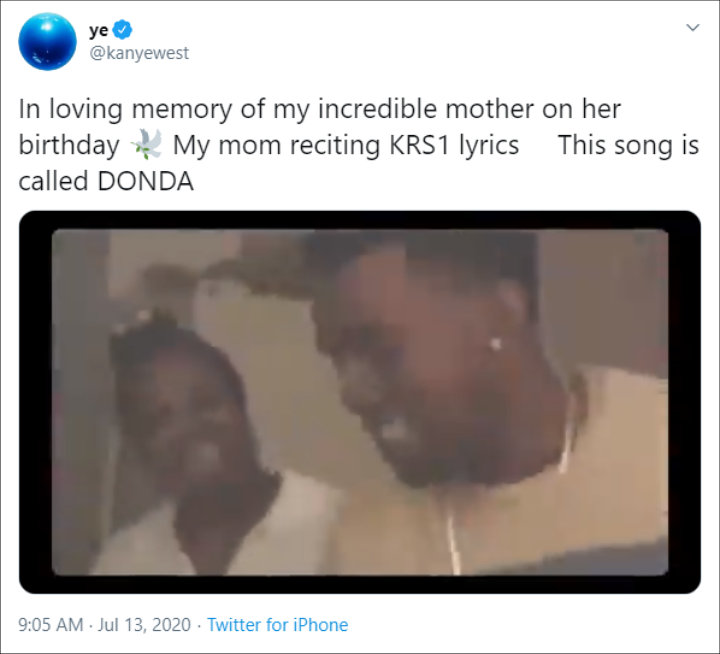 Kanye West paid tribute to his late mother through 'DONDA'.

In the opening of the track, Kanye's mother can be heard reciting the lyrics to rapper KRS-One's hit "Sound Of Da Police", as a gospel-style track plays in the background.

The video also shows numerous black people living their lives in a country abroad, before the clip switches to film of Kanye roaming a beach.

In the lyrics of the song, Kanye vows to "start a revolution", with the star, who recently announced he's to run for President of the U.S. this year, adding: "Y'all had your fake leaders, don't worry we got it / it only takes 21 days to break a habit."

He also addresses his mum directly, rapping: "Momma I need you to tuck me in / I done made some mistakes and they rubbed them in / I know you and Grandma had enough of them / Why I gotta be so stubborn, then?".

The song concludes abruptly with the husband of Kim Kardashian explaining how he hopes "to end racism once and for all".