AceShowbiz - Social media users are calling for justice after reports emerged of Super Smash Bros commentator Cinnpie's alleged sexual assault on a 14-year-old boy. After Young professional Super Smash Bros player named Puppeh came forward with the allegation on TwitLonger, people have been posting with the hashtag #ArrestCinnamonDunson on Twitter, making it a trending topic.

But much to everyone's surprise, some people thought Puppeh's experiences with Cinnpie, whose real name is Cinnamon Dunson, were not a big deal from male's perspective. Reacting to the trending hashtag, one person wrote, "#ArrestCinnamonDunson, how about no? What real man would come out and accuse an older woman of exploiting him? That's literally a dream of almost every guy. Banging a woman ten years older, I did and it was amazing!"

The said comment baffled other users, who have since responded with disagreement. "Does show problem male abuse by woman is often not taken seriously enough. If this is so then #ArrestCinnamonDunson is a valid response," one of them reacted. 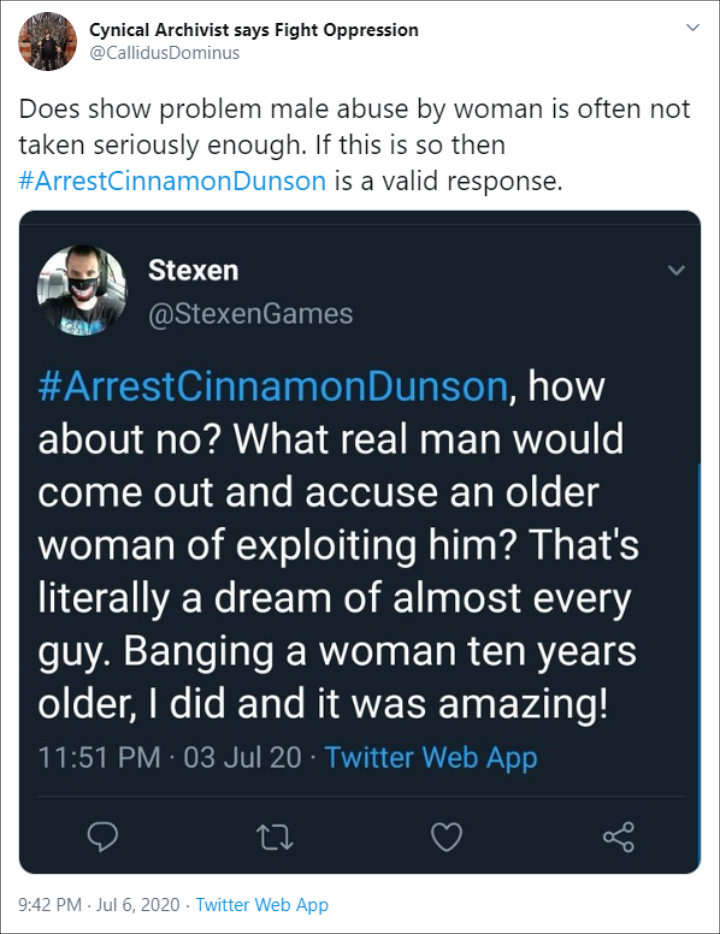 Another called out the double standard on how people would react if an older man abuses a younger woman, writing, "If the case was a 14 year old girl.. and a 24 year old man. This would destroy that mans career and life. But for some reason. 14 year old boy, 24 year old woman. And people defend her. No. Wrong is wrong. There is no room for double standards. Arrest her." 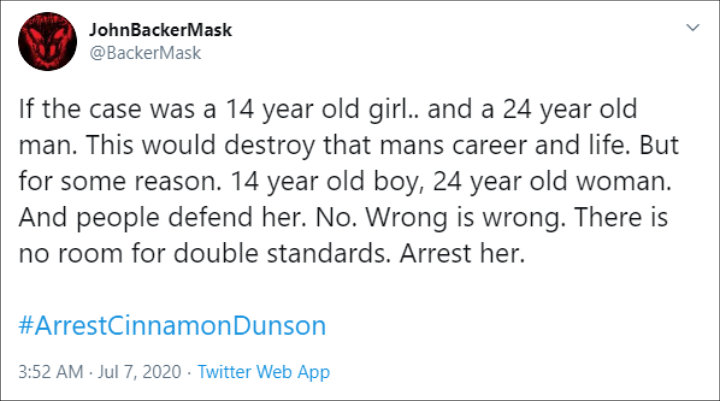 "She sexually abused a 14 year old child. These reactions are heartbreaking," another clapped back at those who took the allegation against Cinnpie lightly. "This is why male victims don't come forward. Sure when I was 14 I would of thought it was "cool" but the reality is this warps you minds, it damages them for life. #ArrestCinnamonDunson."

Retweeting the previous user's comment, another shared her/his 50 cent on the matter, "She deserves to be arrested if this is true, it can f**k you up for the long run. I know from personal experience, it took me 6 years to fully realize how much it affected me. Shaming victims male or female for speaking out is horrible and wrong #ArrestCinnamonDunson." 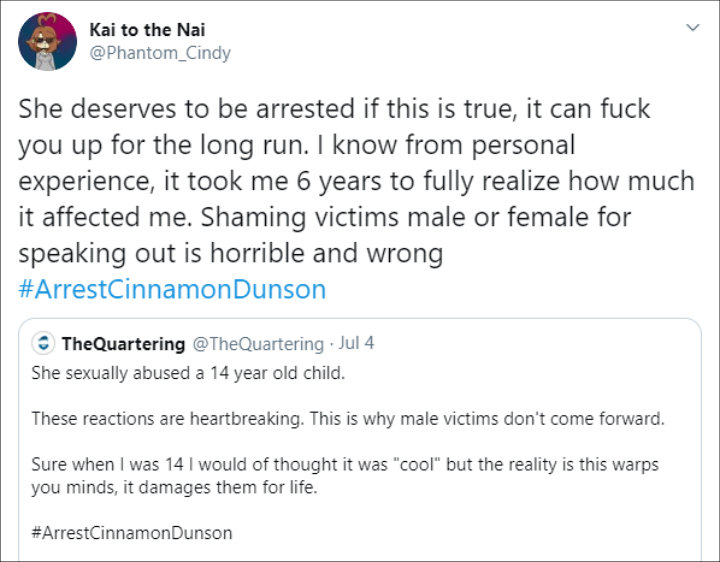 Someone else demands equal treatment on male and female abuser, posting, "#ArrestCinnamonDunson Stop women predators. Women should not just get away for free just because they're women. Arrest her before she sexually abuse other kids." 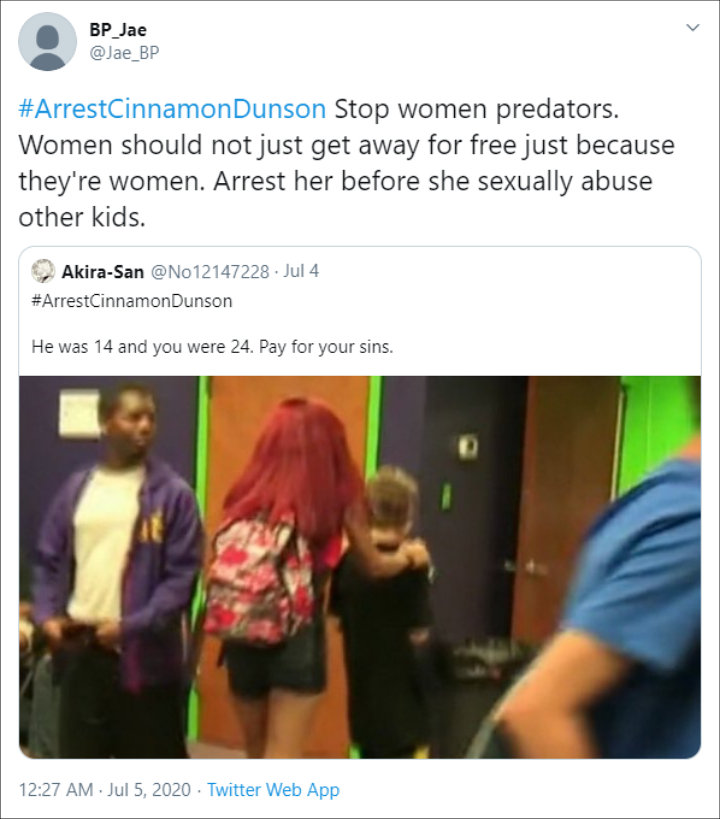 On Wednesday, July 1, Puppeh detailed his harrowing experiences with Puppeh, which started in 2016 when he was only 14 years old and she was 24. "Throughout the entire summer of 2016 I had a sexual relationship with Cinnpie (Cinnamon as she was known as during that time)," he began his post. "I was manipulated, used, and sexualized."

Puppeh wrote that Cinnpie initiated sexual conversations on Snapchat with him even before the summer of 2016, but the first alleged incident happened during a party they had with other Smash players after some tournament. He wrote that "Cinnamon, who was pretty drunk at the time, then ran after me and tackled me to the ground and started to make out with me while laying on top of me."

Puppeh claimed it wasn't the only time he had a sexual experience with Cinnpie, but "some of them are a blur in my mind and I only remember probably 3 or 4 times vividly." He went on sharing, "Our sexual relationship escalated as far as oral sex, but never as far as sexual intercourse."

Puppeh additionally claimed that the memory of their experiences "still really f**ks with me to this day. I truly believe most of my mental issues stem from that summer and how she treated me."

Back in 2019, rumors of Puppeh said Cinnpie's sexual relationship first surfaced, but both of them denied it at the time. "I wake up to disgusting rumors about me and people actually questioning them," she wrote. "No, it's not true. That's all the energy I will allow to this. Please try not to give attention to rumors that are based on 'I heard it'. This hurts."

Cinnpie has not responded to Puppeh's allegations, while Smash Conduct Panel has been investigating the claims. 2GGaming has also banned Cinnpie and other pro gamers who have been recently accused of sexual assault and harassment, namely D'Ron "D1" Maingrette, Richard "Keitaro" King, Nairoby "Nairo" Quezada, Scott "S2H" Castro and Matthew "Xzax" Liberatore, from competing in future 2GG events.