AceShowbiz - Paul Walker's unbreakable bond with Vin Diesel has apparently been passed down to their children. Nearly seven years after the Brian O'Conner of "Fast and Furious" died in a car crash, his daughter Meadow Walker showed off that she is still very much a part of his co-star and her godfather's family as she shared a rare selfie with his three children.

On Monday, June 29, the 21-year-old uploaded on Instagram an outdoor photo of her being surrounded by Vin's children, 12-year-old Hania, 10-year-old Vincent and 5-year-old Pauline. While she wore a maroon hoodie and flaunted a soft smile, the other three sported casual clothes and flashed big smiles as all four posed for the camera.

In the caption of the heartwarming picture, Meadow simply wrote, "Family, forever." Her post has also caught the attention of other cast members in the "Fast & Furious" film franchise. "Fast and Furious 6" actress Gal Gadot sent multiple heart emojis in the comment section, whereas "Furious 7" actress Nathalie Emmanuel commented, "Miss you all." 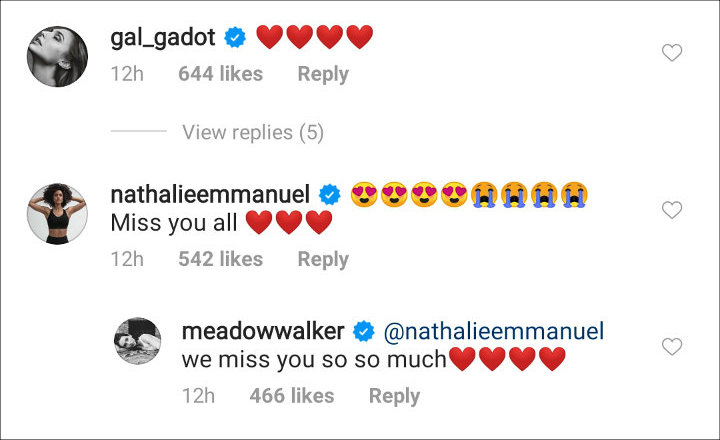 This was not the first post Meadow made with members of Vin's family. Back in August 2019, she shared a photo of her holding a smiling Hania in a loving embrace on her Instagram account. Along with the picture, she wrote, "with my angel."

Vin himself kept a close relationship with Meadow after Paul's tragic death. In early November 2019, he celebrated her 21st birthday with a loving tribute post. Sharing a photo of the young woman along with his youngest daughter, he wrote, "I could say that I am so proud of the person you are becoming... but the truth is I have always been proud of you."

"Happy Birthday Meadow! I know it's your 21st and you wanted to go big in Japan, but the family has a cake waiting for you when you get home, so hurry," the 52-year-old actor continued. "Love you kid. Uncle Vin." In return, the birthday girl wrote back at the time, "Thank you so much. I can't wait to see you soon. And my little angels."