After the former Harry Potter depicter publicly disagrees with the author's objection to non-gendered language, #AskDanielRadcliffe is trending on Twitter with people expressing their confusion over this transgender issue.

AceShowbiz - Turns out not everyone thinks that J.K. Rowling is wrong and Daniel Radcliffe is right in the debate surrounding the use of non-gendered language. After the British actor spoke out against the "Harry Potter" author's tweets which were labeled transphobic, people are now dragging him on Twitter.

These people took to the micro-blogging site to express their confusion over the idea of no longer using gendered language. Tweeting with the hashtag "#AskDanielRadcliffe" which has been trending in the U.K., they got their point across that using non-gendered language doesn't make sense in certain ways.

"Dear Dan, as CoVid-19 seemingly kills twice as many men than women, if men identify as a woman does that offer protection from it?" one sarcastically asked. Another tweeted, "#AskDanielRadcliffe 99% of sex trafficking victims are female. As you have declared yourself an authority on what women are, how is it that traffickers know who to kidnap? And why do you believe that their victims should be stripped of their right to female-only spaces?" 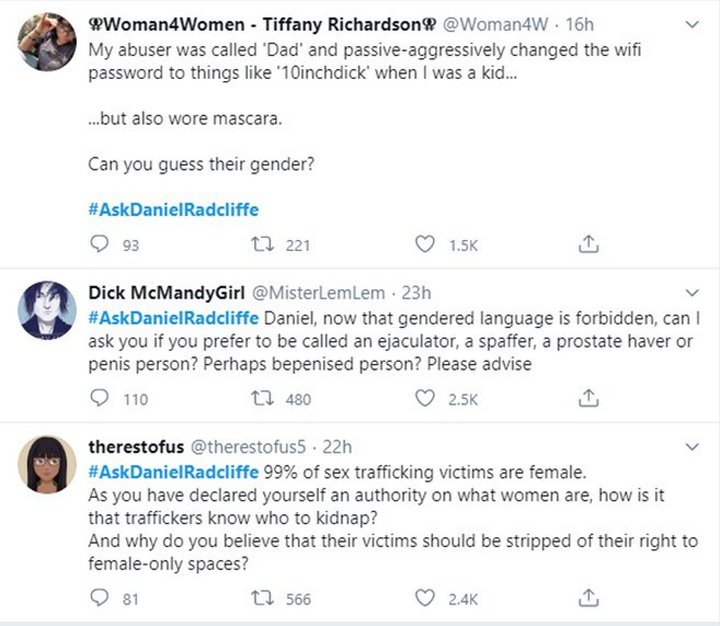 "Hi Dan, if transwomen are women, and I am a woman, am I a transwoman? Thanks in advance for answering," read a silly third question. Someone else roasted him, "Daniel, now that gendered language is forbidden, can I ask you if you prefer to be called an ejaculator, a spaffer, a prostate haver or penis person? Perhaps bepenised person? Please advise."

Daniel Radcliffe is roasted on Twitter after speaking out against J.K. Rowling's transphobic tweets.

Agreeing with these people, someone reacted to the brouhaha on Twitter, "I mean, eventually, women were going to get tired of being told what a woman is and others infringing on what they were born as." Another called out other actors who have criticized Rowling for her stance on the transgender issue, "They need to do this for Sarah Paulson, Eddie Redmayne, Emma Watson, Mara Wilson, Rupert Grint et al!!!"

Rowling was under fire after she posted her controversial tweets, in which she argued that discussion of gender identity invalidates biological sex. " 'People who menstruate.' I'm sure there used to be a word for those people," she tweeted on June 6. "Someone help me out. Wumben? Wimpund? Woomud?"

"If sex isn't real, there's no same-sex attraction. If sex isn't real, the lived reality of women globally is erased," she added. "I know and love trans people, but erasing the concept of sex removes the ability of many to meaningfully discuss their lives. It isn't hate to speak the truth," she insisted.

Daniel later responded to Rowling's tweets by expressing his support for trans community. "Transgender women are women," the 30-year-old star said in a statement on the Trevor Project web site. Without mentioning the 54-year-old screenwriter's name, he continued, "Any statement to the contrary erases the identity and dignity of transgender people and goes against all advice given by professional health care associations who have far more expertise on this subject matter than either Jo or I."

6ix9ine's Girlfriend Says They're Fighting Over Wigs, Gushes About His Skills in Bed