The 'Fresh Prince of Bel-Air' alum takes to Twitter to call out a 'Karen' employee following an alleged racist encounter before the airlines company reaches out to her.

AceShowbiz - Amid the Black Lives Matter movement, there are still a few instances where African-Americans received racist treatment. Nia Long has become one of the victims and she was not hesitant to publicly call out the so-called "Karen".

The actress took to Twitter on Saturday, June 6 to complain about the unpleasant encounter with a racist employee of American Airlines. She posted on her account, "Hey @AmericanAir I have a story about my first flight experience since COVID. I'm pretty sure I met 'Karen' aka Gina. You have to do better. Blatant discrimination will no longer be tolerated. White entitlement does NOT fly in this new day. Check your employees."

Nia has not detailed her terrible experience with the airlines, promising, "More to come." But her tweet was enough to catch the company's attention as it soon replied to her tweet and asked to continue their communication with DMs.

"Discrimination has no place at American," the company assured, before adding, "Please meet us in DMs with more details about what happened. We'd like to review further." 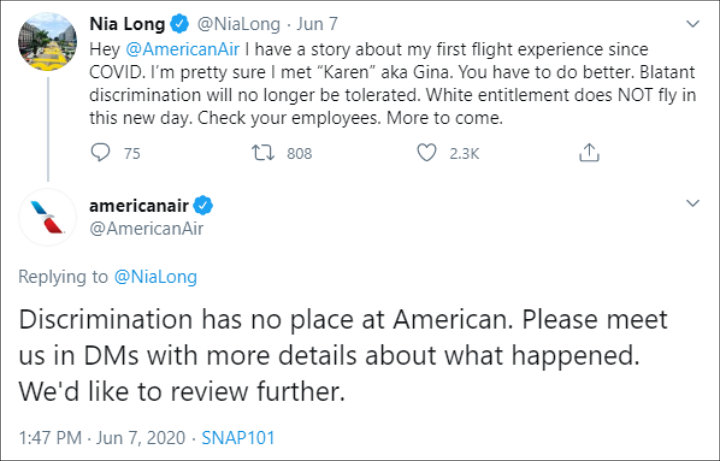 The airlines also responded to a tweet from Nia's follower who complained about her similar experience with American Airlines. "American Airlines did the same thing. All they could offer me was a $175 for my next flight. As if $175 was how much the disrespect and racism I received on their flight was worth. They me embrassed me on purpose because of my color and later deemed I was not in the wrong," the said user wrote, to which the company replied, "It's important to us that every customer feels welcome and valued every time they fly. Our team is here for you via DM."

This isn't the first time, though, that American Airlines has been reported for disturbing incidents by African-American passengers. In October 2017, the NAACP issued a warning to African-Americans against traveling with the airlines. It cited multiple examples where black passengers were either forced to give up their seats on a flight they had checked in on or were removed from flights instead.

The organization said that these instances "suggest a corporate culture of racial insensitivity and possible racial bias." Any member of the African-American community who is supposed to travel using American Airlines has been asked to use caution.