Garrett Yrigoyen on Disagreement With Bekah Martinez Over Police Support: It's Easy to Type

Clashing with the Bachelor alum for his 'Thin Blue Line' post amid the 'Black Lives Matter' movement, the fiance of Becca Kufrin claims that he 'has grown and become more educated.'

AceShowbiz - The Black Lives Matter movement has caused a divide between Garrett Yrigoyen and Bekah Martinez. Shortly after the season 22 contestant of "The Bachelor" alum criticized him for his "Thin Blue Line" post, the fiance of Becca Kufrin fired back by reminding that conversations need to take place and that "it's easy to type."

The clash between the two Bachelor Nation alums took place after Yrigoyen voiced his support to the law enforcement. In a lengthy Instagram post shared Thursday, June 4, he wrote, "I've listened, learned, helped, supported, and grown. With so many friends and family in law enforcement I couldn’t sit back and not support them and the hundreds of thousands of men and women of all races that represent this Thin Blue Line as well."

Yrigoyen's post got Martinez commenting, "Uhhhhh law enforcement CHOOSES to put on a blue uniform. Black people don't choose to be black. big difference. also 'the more police brutality they face the more on edge they become'.... that's scary as f**k." She went on to attack him, "So interesting that you stay silent about black lives but just HAVE to speak out about cops. You’ve made your views known before and here’s a great reminder that not much has changed."

In response, Yrigoyen captured Martinez's comment and shared it on Instagram Story. Along with it, he hit back, "I remember you saying how much you loved me to Becca and you made a mistake for judging me in the past without knowing me…needless to say you never got to know me, still don't know me, and you're no longer invited over."

"P.S. I was advised to not post my caption with my black square …as I had written a message about peace, racism, and change … because I believe BLM is important, I still got ridiculed," he added. "I'm also showing my love & support for others at this time as well, and still get ridiculed. Doesn't make me a racist nor does it take away from BLM. Try having conversations with people before judging and labeling. Love to all." 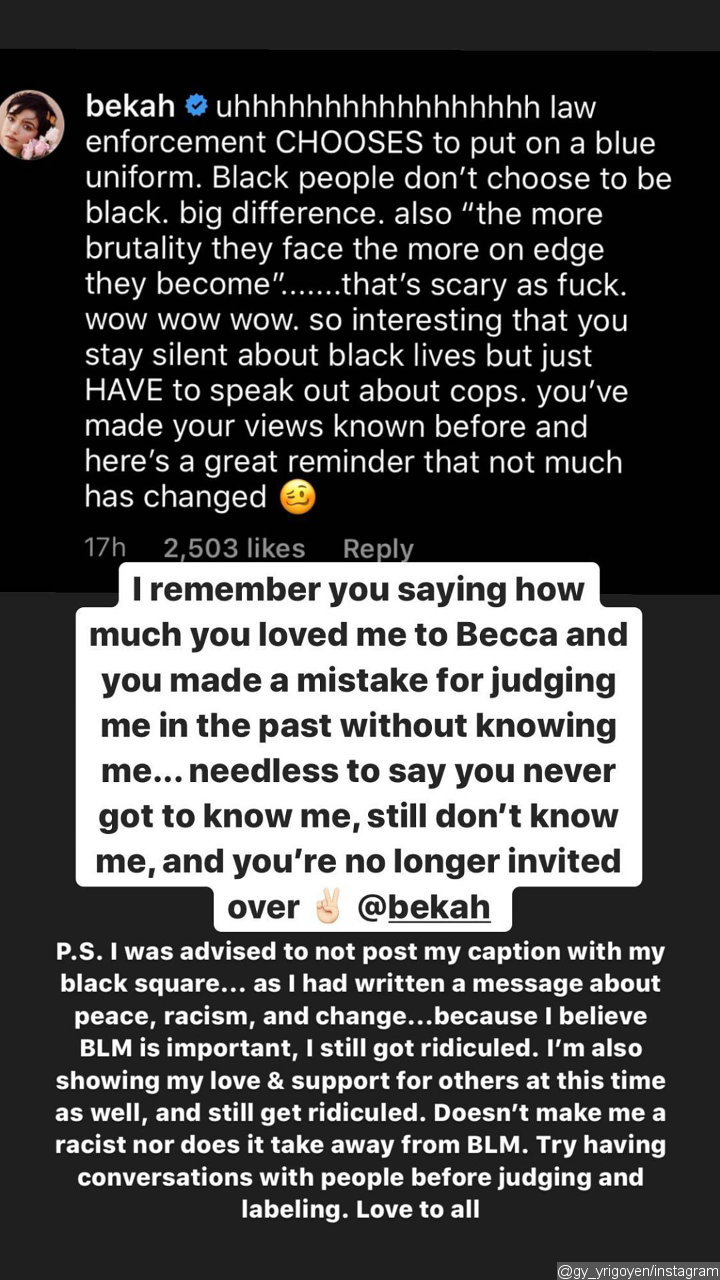 Yrigoyen further made public the private message Martinez sent to him. "Lmao definitely not my words," the 25-year-old tried to explain in the message. "I said 'tell garrett I'm sorry I gave him so much s**t' and at the time I meant it because I thought you actually cared about changing." 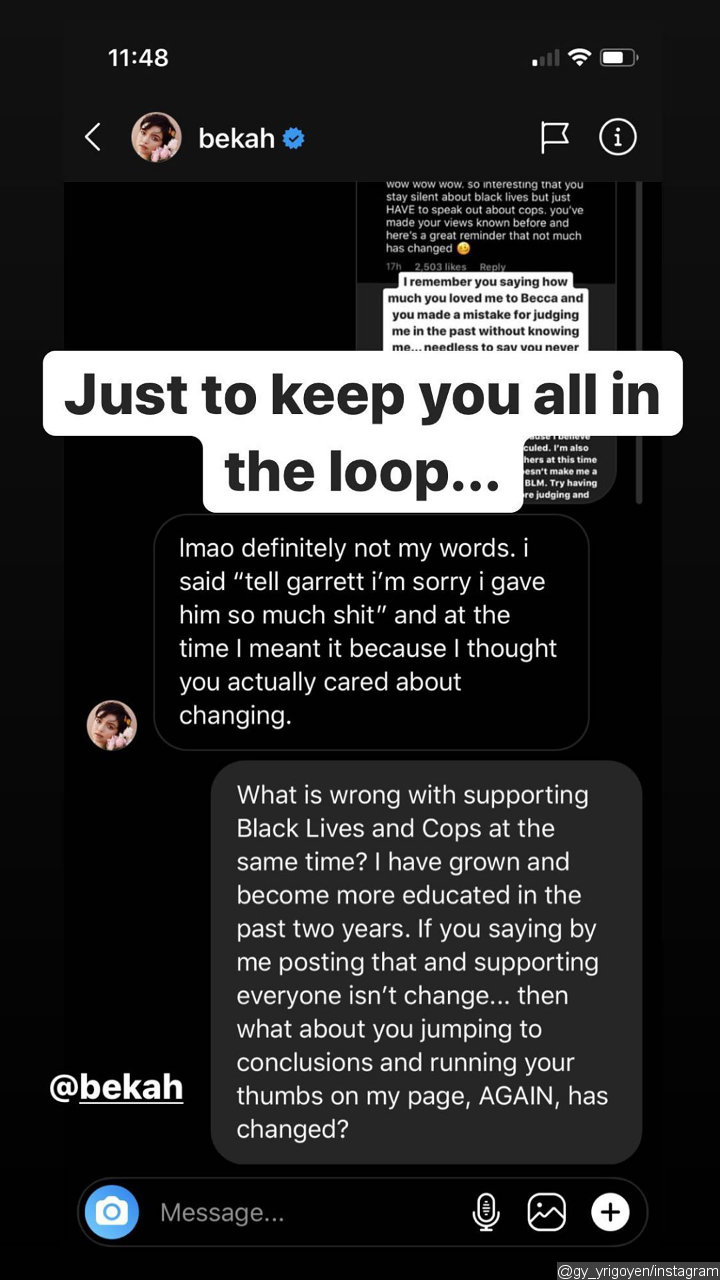 Garrett Yrigoyen questioned what is wrong with supporting two sides.

To the message, Yrigoyen responded by asking, "What is wrong with supporting Black Lives and Cops at the same time?" He added, "I have grown and become more educated in the past two years. If you saying by me posting that and supporting everyone isn't change...then what about you jumping to conclusions and running your thumbs on my page, AGAIN, has changed?" 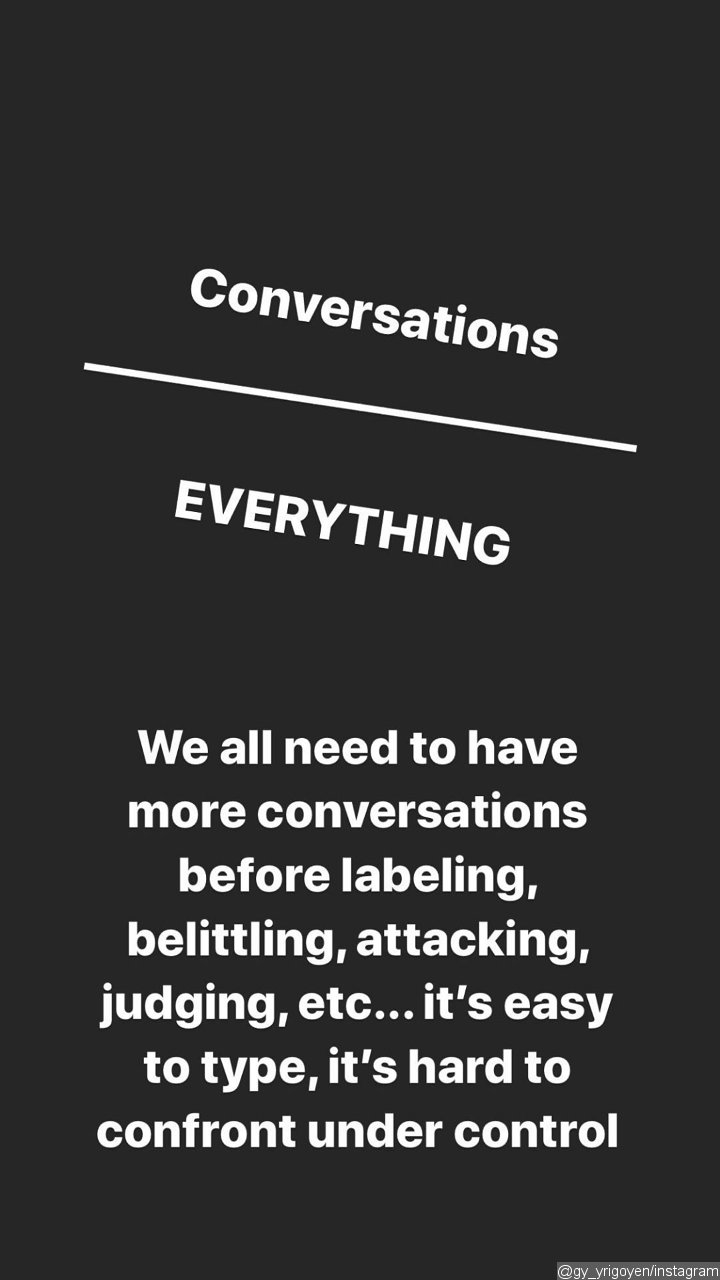 Garrett Yrigoyen reminded others that it is important to have a conversation.

In a third Instagram Story addressing the issue, Yrigoyen made a point about conversations over everything. "We all need to have more conversations before labeling, belittling, attacking, judging, etc…," the reality star, who came under fire in 2018 for liking post mocking Parkland shooting survivors among others, stressed, "it's easy to type, it's hard to confront under control."

Stars Who Are Arrested While Protesting