The Grammy Award-winning artist admits that she went on a date or two with the 'Rush Hour' actor a long time ago, but denies that they have been dating since then.

AceShowbiz - India Arie has set things straight on her dating history. The singer/songwriter was suddenly swept off in a dating speculation involving her and Chris Tucker on Thursday, June 4. According to the report that circulated on Twitter, she and the actor/comedian have been together for 13 years and have managed to keep their relationship under the radar all this time.

Not letting it spread like wild fire, India soon took to Twitter to shut down the rumor. Sharing a clip of Michelle Obama laughing on a late-night talk show to express her feeling, she wrote in the caption, "Me and Chris Tucker been dating for 13 years?!!! 13 YEARS?! Whew chile! Thats some STRONG BLACK (LOVE ) Tea." 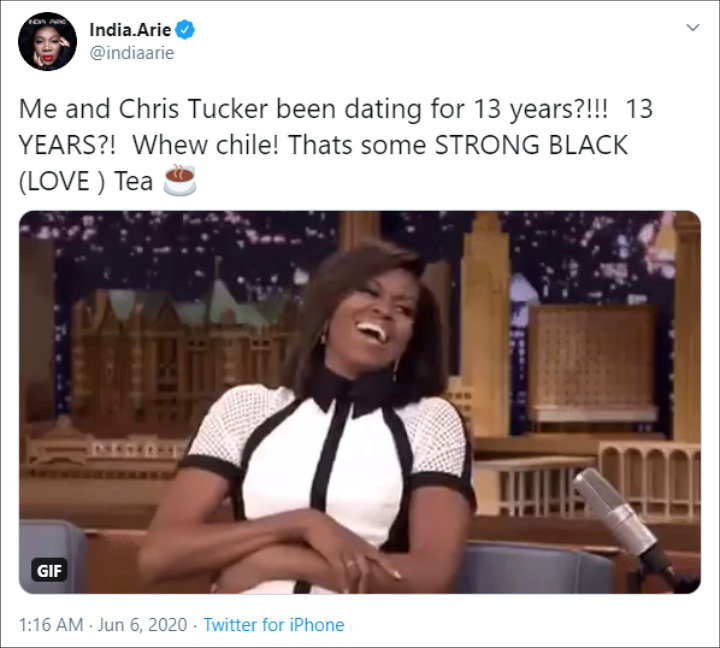 She stressed it in another tweet, "Soooo, NO. I Do not date @christuckerreal," though she admitted that they "went on A date or 2" a long time ago. "... apparently that was 13 years ago?" she added, apparently having little recollection of their brief fling as claiming, "I really don't remember Lol." 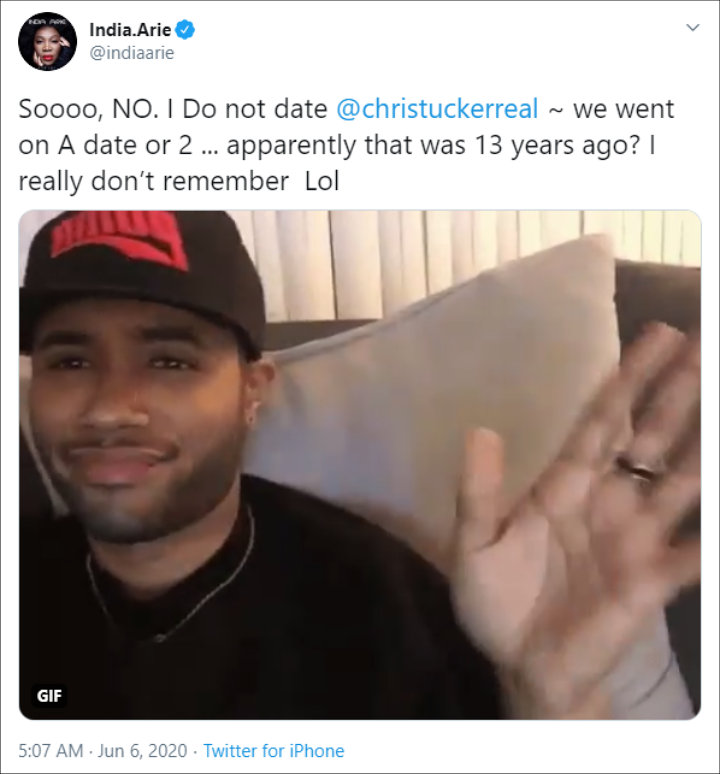 The singer repeated her denial.

To those who believe in the dating speculation, the four-time Grammy winner responded, "For you who LOVED the IDEA, @christuckerreal and I as a couple lol, I feel you." She then promoted her new song titled "Crazy", "I have a REAL LOVE story for you, I really do. #crazy."

Prior to India's denial, people were shocked to learn that the "Beautiful Flower" singer and the "Silver Linings Playbook" actor have been allegedly quietly dating for over a decade. "Chris Tucker and India Arie have been dating for 13 years??!" one person reacted.

"Chris Tucker and India Arie really been together for years and we didn't know??! Dang. Talk about being low key and building," another surprised user tweeted. A third person asked in disbelief, "SOMEBODY F**KIN LYING DAWG AINT NO WAY CHRIS TUCKER LOUD A** BEEN HUNCIN ON INDIA ARIE FOR 13 YEARS AND AINT NOBODY KNOW. WHAT????"

Chris, meanwhile, has not responded to the dating speculation.

Trina Offers Another Apology Over 'Animals' Comments: 'I Am Not Perfect'

Garrett Yrigoyen on Disagreement With Bekah Martinez Over Police Support: It's Easy to Type