Jason Derulo Fires Back After Being Trolled for 'Corny' TikTok Video

Catching wind of the hate comment, the 'Swalla' singer has a sarcastic response to it instead of popping some veins over it, but that unfortunately doesn't stop the clownery.

AceShowbiz - Jason Derulo has found himself being the butt of a joke on social media over his recent TikTok video. The singer recently caught wind of the semi viral tweet that clowned him, and instead of popping some veins, the singer had a classy response to it.

The fan mocked Jason for his latest TikTok video in which he was seen dancing while flexing his muscles. "THIS N***A IS THE HUMAN EQUIVALENT OF A BRIMLESS SNAPBACK," the fan wrote after re-sharing the clip.

Jason quickly fired back at the fan for the clownery. "I Appreciate you! I Got 500k followers added to my 18 million in one day thanks to you," the "Talk Dirty" singer replied sarcastically. He added, "Hopefully you can use that same energy to grow your own followers someday." 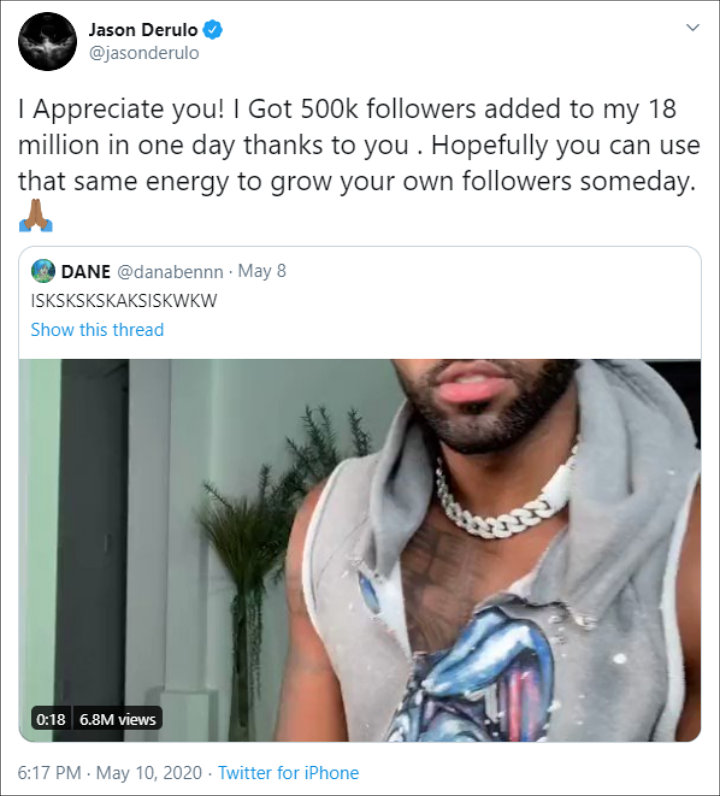 Despite the strong response, people were still coming at him. "This didn't make you any less corny," one user said, to which someone responded, "girl if anything it made him even more corny."

Someone else added, "You are so corny. Why did you even let this bother you, let alone comment on it publicly?"

However, some of his supporters jumped to his defense with one asking, "so apparently dudes just having a good time is corny now?" Alluding that the naysayers were actually obsessed with Jason, one other wrote, "I don't understand why some people like to pick on you. It's always the same ' oh, he's corny' and yet, they can't stop watching what you do."

One person also applauded the 30-year-old for his positive response to the hate comments. "Lmao, showing love to a hate account. i love your positivity keep having fun and making videos," the person said. Another comment, meanwhile, read, "I don't care what you all say about this man, he is talented and fine and I don't know what all the slander is about lmaooo."