Gregory and Travis McMichael, who were involved in the fatal shooting of the 25-year-old outside Brunswick, Georgia in February, have finally been arrested and charged with murder.

AceShowbiz - More celebrities have joined the rally to seek justice over the murder of Ahmaud Arbery. Following the lead set by NBA star LeBron James in voicing his outrage, Taylor Swift, Kim Kardashian and Ellen DeGeneres turned to their individual Twitter account to condemn the fatal shooting of the 25-year-old.

On Thursday, May 7, Swift tweeted, "I'm absolutely devastated and horrified by the senseless, cold blooded, racially motivated killing of Ahmaud Arbery. #JusticeForAhmaud." DeGeneres also shared similar sentiment in her tweet as she wrote, "This young man was jogging, and was hunted down and killed for absolutely no reason other than the color of his skin. His name is Ahmaud Arbery."

The host of "The Ellen DeGeneres Show" went on to voice her stance and extended her sympathy to Arbery's family. "I join everyone calling out for #JusticeForAhmaud and I'm sending all of my love to his family. #IRunWithMaud," she declared. 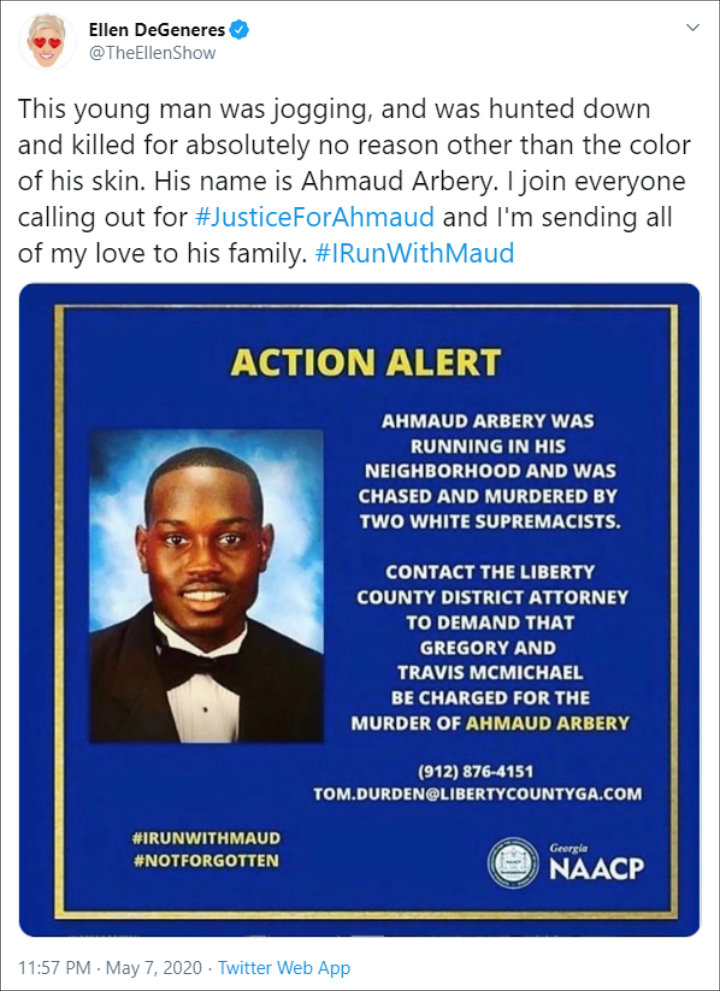 Criminal justice activist Kardashian, in the meantime, took it one step further by urging fans to sign a Change.org petition that call for charges to the men responsible for Arbery's death. "Please sign this petition so that charges will be filed and justice for Ahmaud Arbery's family can be served #JusticeForAhmaudArbery," the "Keeping Up with the Kardashians" star tweeted. 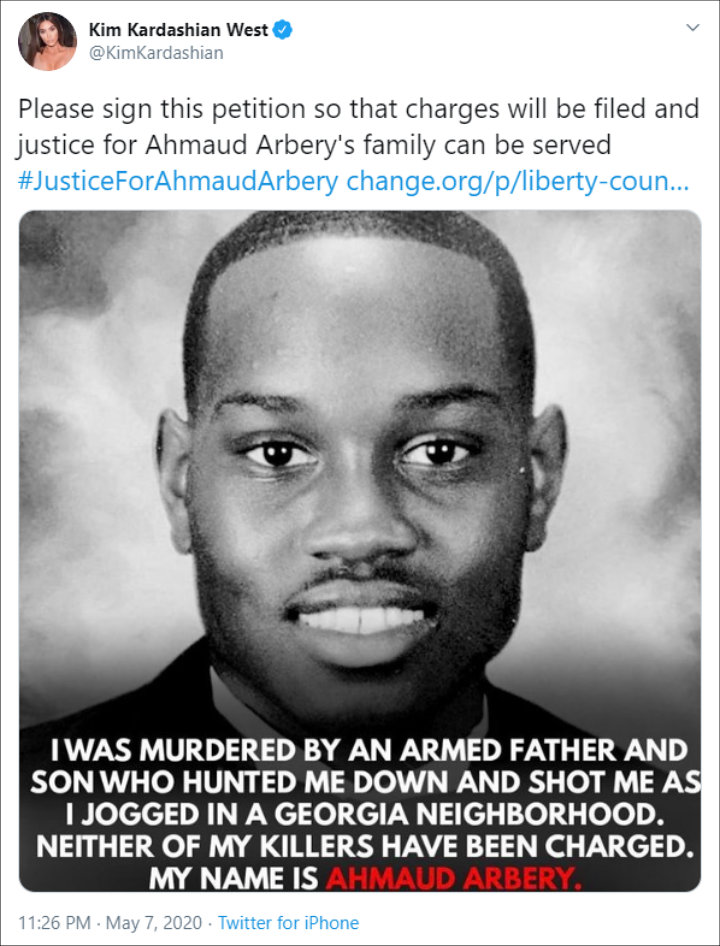 The trio were among the many who demanded justice for Arbery since the graphic footage of his February shooting surfaced. James and presidential candidate Joe Biden were the first to share their anger online. Since then, Sean "P. Diddy" Combs, Justin Timberlake, Michael B. Jordan and Viola Davis have joined the cause along with a number of other stars.

Arbery was shot to death while out jogging outside Brunswick, Georgia in February. A video of the incident captured two white men, Gregory McMichael and his son, Travis, waited for him to get close to a parked white pickup truck before gunshots were heard. The father and son reportedly claimed they thought he was a burglar.

The released video has since sparked widespread outrage over Arbery's killing. In late Thursday, the Georgia Bureau of Investigation announced that the McMichaels have finally been arrested. They were charged with murder and aggravated assault. While the two men confronted Arbery with firearms, it was Travis who made the fatal shot.