The NBA star could not hide his outrage after a video of the incident taking place in Georgia surfaced, while presidential candidate Joe Biden deems the killing of the 25-year-old 'cold blood'.

AceShowbiz - LeBron James has been left sickened by the shooting to death of Ahmaud Arbery. After graphic footage of the incident taking place outside Brunswick, Georgia in February surfaced online, the Los Angeles Lakers star turned to social media to express his outrage at everyday hunting of black men in the country.

"We're literally hunted EVERYDAY/EVERYTIME we step foot outside the comfort of our homes! Can't even go for a damn jog man! Like WTF man are you kidding me?!?!?!?!?!?" the 35-year-old athlete tweeted on Wednesday, May 6. "No man fr ARE YOU KIDDING ME!!!!! I'm sorry Ahmaud(Rest In Paradise) and my prayers and blessings sent to the.....heavens above to your family!!"

Along with his angry tweet, the NBA star posted a black-and-white photo of the late 25-year-old. The picture itself features a caption that read, "I was murdered by an armed father and son who hunted me down and shot me as I jogged in a Georgia neighborhood. Neither of my killers have been charged. My name is Ahmaud Arbery."

Hours before James voiced his thought on Arbery's shooting, presidential candidate Joe Biden has made a public call for justice. "The video is clear: Ahmaud Arbery was killed in cold blood," tweeted the former Vice President. "My heart goes out to his family, who deserve justice and deserve it now. It is time for a swift, full, and transparent investigation into his murder." 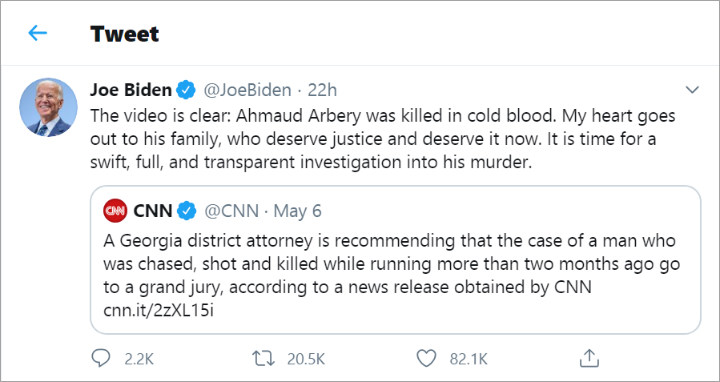 Arbery was shot to death while out running in a residential neighborhood after being chased by two white men, Gregory McMichael and his son, Travis. Both men, who have not been arrested or charged for the aspiring electrician's death, reportedly told the police that they suspected him to be a burglar.

A video of the February incident has since made its way out on social media. It captured Arbery jogging along the road while a white pickup truck was parked in front of him. As he approached the truck, he ran toward the right side, and a gunshot was heard. When Arbery came into the camera view again, he could be seen struggling with a man before more shots were heard.

On Tuesday, May 5, District Attorney of Georgia's Atlantic Judicial Court Tom Durden issued a statement over the case. "After careful review of the evidence presented, I am confident the case should be presented to the grand jury of Glynn County for consideration of criminal charges," his statement read.

Arbery's mother, Wanda Cooper, however, could not help but admit that she is "feeling very discouraged at this point." She added, "I just think about how they could allow these two men to kill my son and not be arrested. That's what I can’t understand."