The 'Super Bass' hitmaker says in a question and answer session on Twitter that she will debut 'a baby bump' in a couple months and reveals her cravings during the coronavirus lockdown.

AceShowbiz - Is Nicki Minaj really having a bun in the oven? The 37-year-old female rapper sent her fans into frenzy as she appeared to confirm pregnancy in a recent Twitter Q&A to promote her remix of Doja Cat's single "Say So".

"Can you post a baby bump pic Queen?" one of her loyal devotees asked, to which the femcee replied, "Yea in a couple months. The world ain't ready yet."

She didn't elaborate further, but she claimed in another post that she craved red meat and salad with extra jalapenos.

As another fan asked if she went to bathroom a lot, she answered, "Lmao. No throwing up. But nausea and peeing non stop. Omg what do u think this means guys???? Lmaooooooooooo." 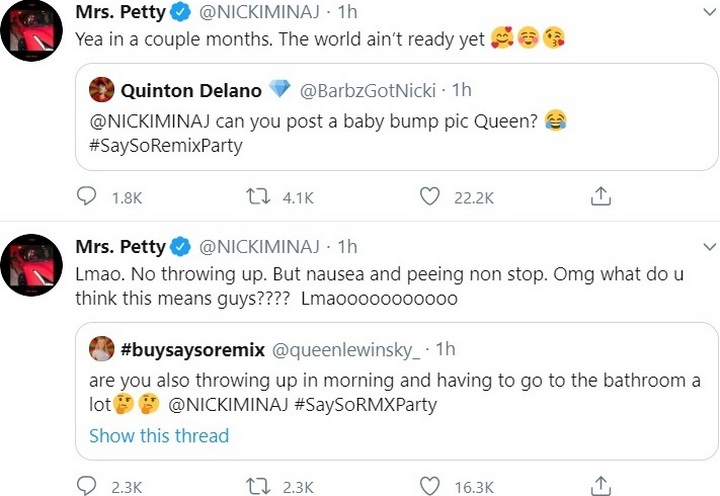 She additionally addressed controversy surrounding her lyrics, "Used to be bi now I'm just hetero." She wrote, "I was saying it in a sarcastic way. Like saying I'm deliverT. Rolling on the floor laughing but dang I am Strickly Dickly now tho. Yikes."

Earlier this year while on a trip to Trinidad, Nicki Minaj was also hit with pregnancy rumors when husband Kenneth Petty kept rubbing her stomach in a video. She, however, quickly shot down the baby chatters, "Y'all swear y'all my mother chile [frown]. I'm pregnant with so many ideas for this album. It'll be my best."

If Nicki really is pregnant, it will be her first child. Meanwhile, Kenneth already has children from a previous relationship. When the couple went public with their relationship, his baby mama claimed she was dumped by Kenneth for the rapper.

The "Anaconda" hitmaker and Kenneth are childhood friends. She started dating him in 2018. She announced their marriage in October 2019 following a year of dating. She was previously linked to fellow hip-hop star Meek Mill and "Love & Hip Hop: Hollywood" member Safaree Samuels.