The Academy Award-winning filmmaker behind 'Jojo Rabbit' has been announced to direct an upcoming feature film in the space-fantasy franchise and co-write the script.

AceShowbiz - Taika Waititi is saddling up to go to a galaxy far, far away. The "Thor: Ragnarok" helmer has been officially announced to work on a new "Star Wars" feature film for theatrical release.

The news was announced on Monday, May 4, which happens to be a day when fans celebrate the "Star Wars" media franchise created by George Lucas. Known as Star Wars Day, the date was chosen for the pun on the catchphrase "May the Force be with you" as "May the Fourth be with you."

Taking to "Star Wars" official Twitter page, Disney and Lucasfilm revealed that the filmmaker, who recently won an Academy Award for Best Adapted Screenplay for his work on "Jojo Rabbit", will co-write the upcoming "Star Wars" movie with Academy Award nominee Krysty Wilson-Cairns.

Rian Johnson, who directed 2017's "Star Wars: The Last Jedi", is among those who are excited to learn of Waititi's involvement in the project. He retweeted the official announcement and gushed over it, "I have NO idea what kind of SW will come out of Taika and Krysty's and Leslye's brains, if I tried to guess I'd be wrong, and that is the most exciting thing I can imagine." 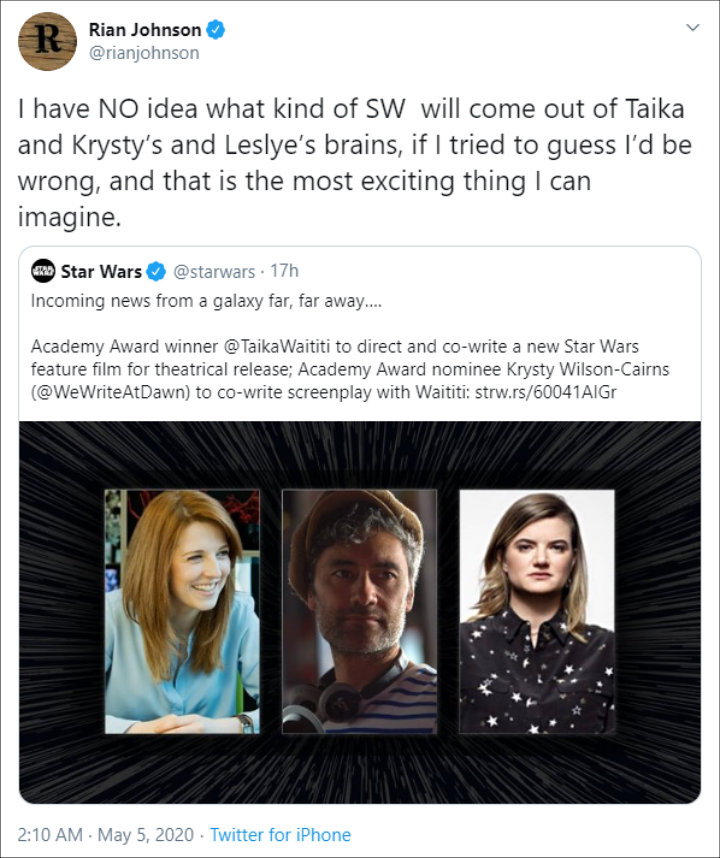 Along with the announcement, Disney and Lucasfilm also stated that Emmy-nominated writer Leslye Headland ("Russian Doll", "Bachelorette") is currently developing a new untitled "Star Wars" series for Disney+. She will write, executive produce and serve as showrunner for the series.

Waititi's possible involvement in the "Star Wars" movie was first reported back in January. The Hollywood Reporter, which broke the news at the time, noted that it was unknown whether the project is the same one or separate from the one that is being developed by Kevin Feige, whom Waititi was closely working with on "Thor: Ragnarok".

While this will be the first time the Kiwi director is working on a big-screen installment of the space-fantasy franchise, he is no stranger to the "Star Wars" universe, having directed the final episode of season one of the live-action series "The Mandalorian" which streams on Disney+. He also voiced a bounty hunting droid named IG-11 on the series.

50 Cent Reflects on His Feud With Oprah Winfrey

Taika Waititi Dubs Pixar's Screenplays 'Perfect' in So Many Ways