Ariana Grande Feels Offended by TikTok Impersonations of Her

The 'Thank U, Next' singer lets her actual feelings about TikTok users doing impressions of her famous TV character Cat Valentine be known as she calls them 'degrading its entire value.'

AceShowbiz - Ariana Grande isn't flattered by impersonations of her. After a slew of TikTok users went viral with clips of them doing impressions of the singer/actress as her "Victorious" and "Sam & Cat" character Cat Valentine, the 26-year-old star let out her actual feelings about those videos.

On Thursday, April 23, the Grammy Award-winning artist shared on Instagram Stories a post by actor and writer Jordan Firstman in which he did various impressions. In one of his videos, however, he criticized meme makers for trivializing moments that are critical to an artist's career and flipping them to make something else that lacks meaning.

"What if we, like, we took a moment, like a small clip from a movie or a TV show. Something that, like, an artist really poured their soul into and it, like, it just took them years to make....What if we took a moment from that and we kind of, like, recontextualized it-like, does that make sense?" he said in the video. "And we put a completely arbitrary meaning onto that thing that the artist loves so much? Kind of, like, degrading its entire value."

Agreeing with Jordan, Ariana captioned her post, "Omg can this please also double as your impression of the ponytail TikTok girls who think doing that Cat Valentine voice and that wearing winged eyeliner and a sweatshirt is doing a good impersonation of me...'cause this really how it feels...." She added, " 'Degrading its entire value' I screamed." 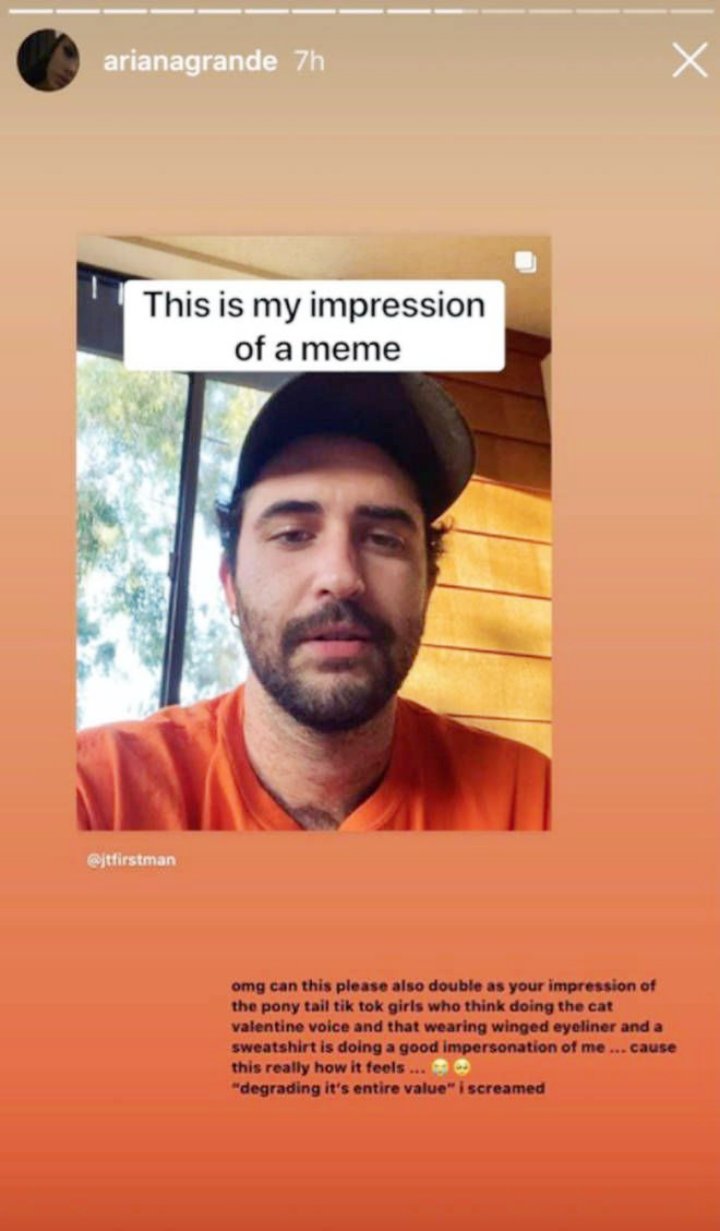 Ariana Grande comments on TikTok impersonations of her.

Prior to this, Ariana responded after TikTok creator Paige Niemann's viral impression of her character Cat caught her attention in November 2019. Apparently seeing it as cringey, she commented on the video, "i just wonder whyyyy the cat voice / dialogue. [crying emoji] i am sure she is the sweetest sweet sweetheart forreal !! but it's definitley bizarre seeing people blend the two worlds lmao."