Through a new Twitter post, filmmaker Matt Reeves updates that the comic book film's cast members, including Robert Pattinson and Zoe Kravitz, are safe amid the pandemic.

AceShowbiz - "The Batman" director Matt Reeves has confirmed the much-anticipated comic book film has been put on hold indefinitely due to the coronavirus pandemic.

Bosses at Warner Bros. previously announced the production would take a two week hiatus earlier this month (March 14), but filmmaker Reeves has no idea when he'll be able to get his cast and crew back on set.

"Yes, we have shut down till it is safe for us all to resume," he tweeted, noting the cast, including Robert Pattinson and Zoe Kravitz, and crew are all "safe for the moment". 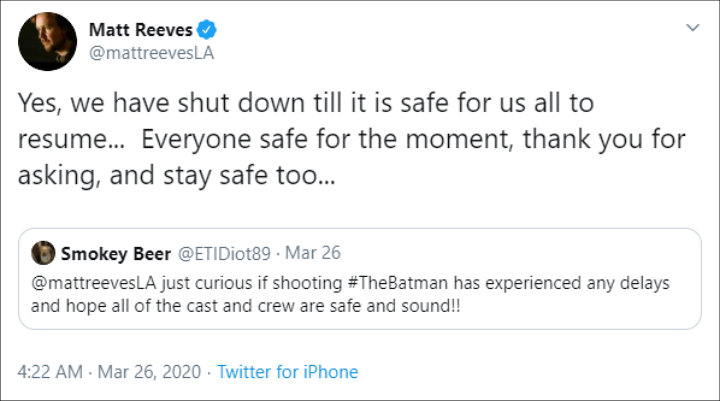 Matt Reeves announced the halt of 'The Batman' production

"The Batman" had been shooting in London and Liverpool, England before it was shut down.