The 'Outlander' actor has landed in hot water after he decided to fly from Los Angeles to Hawaii after the pandemic led to the recent cancellation of the PaleyFest LA event.

AceShowbiz - William Shatner has come to the defence of "Outlander" star Sam Heughan after the Scottish actor was attacked online for vacationing in Hawaii during the coronavirus pandemic.

The 39-year-old decided to fly from Los Angeles to Hawaii after the global health crisis led to the recent cancellation of the PaleyFest LA event, where he had been due to promote his new movie, "Bloodshot".

Heughan shared his location during a Twitter question and answer session with fans on Sunday, March 22, explaining he had arrived before March 17, when Governor David Ige requested tourists postpone any planned holidays in the state for the next month to avoid the further spread of Covid-19.

"Came here before travel ban," he wrote. "Rather concerned to return to UK. Certainly safer here for now. Hope you're safe and your family too!". 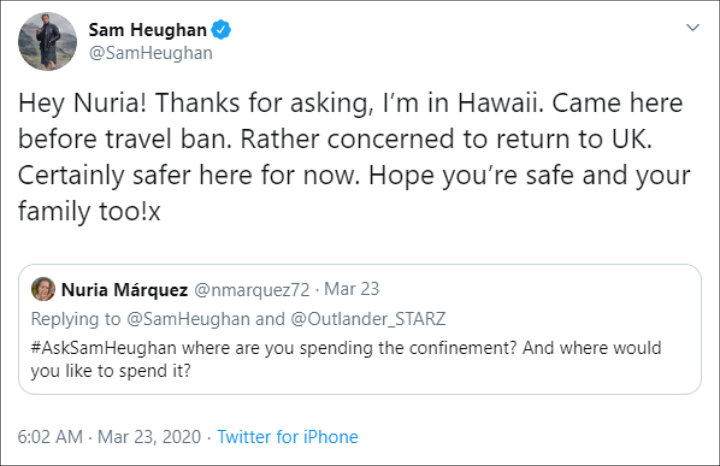 However, his comments sparked a backlash from some followers, who slammed Heughan for potentially putting locals at risk by travelling to Hawaii amid the coronavirus outbreak, even though the actor insisted he was "self-isolating/taking care" during his stay.

Now Shatner has stepped into the "horrible situation" to speak out on behalf of his friend, claiming Heughan is being targetted by a group of "bizarre & older women" convinced he is "secretly seeing" his married co-star, Caitriona Balfe.

In a lengthy Twitter rant on Tuesday, the "Star Trek" legend accused the trolls of "manifesting justifications & lies to compensate to their libelous stories", and argued Heughan is "not being a burden to anyone" as he is actually aiding the economy by renting a place "that would otherwise sit empty."

Shatner went on to blast his friend's critics and tabloid editors who have run gossip pieces on the supposed backlash, instead urging them to "refocus their attention" on more uplifting lockdown stories.

"Or perhaps look at how certain factions of people online are trying to disrupt things; whether it's because they are in fear or jealous or have other issues they are trying to compensate for so they lash out," he suggested.