Addressing people's concern after he came in contact with Idris and Sophie Trudeau, who both tested positive for COVID-19, the F1 star says he is 'feeling healthy' and has 'zero symptoms.'

AceShowbiz - Lewis Hamilton is putting public's healthcare above his own amid the coronavirus pandemic. The British racing driver turned down a coronavirus test after meeting Idris Elba and Sophie Trudeau, who both tested positive for COVID-19, but he has a good reason for it.

Addressing people's concern, he posted a lengthy statement on Twitter on Saturday, March 21. "Hey guys, I hope you're all staying positive, and keeping busy and healthy," he began his statement. "There's been some speculation about my health, after I was at an event where two people later tested positive for Coronavirus."

Despite his interactions with Idris and Sophie, Lewis assured his fans that he's "doing well, feeling healthy and working out twice a day." He added that he has "zero symptoms," 17 days since meeting Sophie and Idris.

On why he didn't take the test, the six-time Formula One World Champion explained, "I did speak to my doctor and double checked if I needed to take a test but the truth is, there is a limited amount of tests available and there are people who need it more than I do, especially when I wasn't showing any symptoms at all."

He, however, still made sure the safety of others around him by keeping himself isolated since last Friday, March 13 and "kept my distance from people." He also urged others to take precautionary measures as saying, "The most important thing everyone can do is stay positive, social distance yourself if you need to, and regularly wash your hands with soap and water for at least 20 seconds." 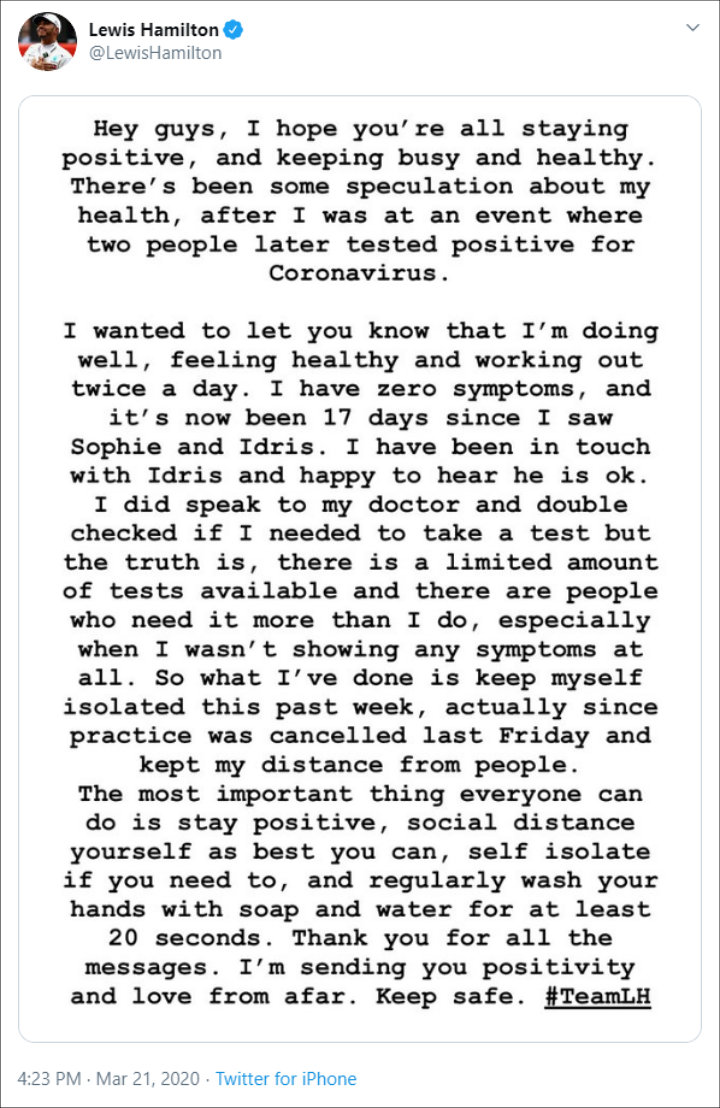 Lewis Hamilton explains why he refuses a coronavirus test.

Lewis met Idris and Sophie, the wife of Canadian prime minister Justin Trudeau, at an event in London on March 4. The "Luther" actor announced he tested positive for COVID-19 on March 16 and has been self-quarantining with his wife Sabrina Dhowre, who also tested positive for the disease. Giving an update on their conditions, the couple told Oprah Winfrey in an interview for her new Apple TV+ series "Oprah Talks" that they are both feeling okay.