The husband of the former 'American Idol' winner previously sparked breakup rumor after he posted a cryptic tweet that read, 'You can't force someone to stay married to you.'

AceShowbiz - Jordin Sparks' marriage to Dana Isaiah is still going strong. Hours after his cryptic tweet sparked speculations there is trouble in paradise, the husband of the "American Idol" alum set the record straight by putting out a simple statement on social media along with a loved up photo of them.

Taking to his Instagram handle on Thursday, March 12, Isaiah ranted, "The internet is a wild place." He also added three rolling-on-the-floor-laughing emojis and a face-palm emoji to emphasize his statement. The photo he uploaded along with his clarification displayed him and his wife smiling from ear-to-ear.

Despite Isaiah's attempt to diffuse the breakup rumors, one particular user seemed to still have doubt on the issue. "But you post it though," the user pointed out. Responding to the comment, Isaiah wrote back, "I posted a general message. Neither me or my wife have publicly made a fool of myself. It's my fault assuming y'all would be brighter tho. Won't happen again."

Aside from Instagram, Isaiah has also made use of his Twitter account to stress that he and Sparks are doing fine. "Trust me when I say this. If me and my wife were having issues... NONE OF YALL WOULD KNOW. LOl," he tweeted.

Supporting Isaiah's denial, Sparks turned to her own social media page to gush over him and their one-year-old son Dana. Along with a photo of their happy family, the 30-year-old singer raved, "These two are my heart." She added in the same caption, "We went 'fimmin' before the rain today! Stay safe out there everyone!"

Isaiah sent tongue wagging about his marriage to Sparks on Wednesday night, March 11. At the time, he tweeted, "You can't force someone to stay married to you. Especially after you made them look like a fool publicly twice. God ain't in that." 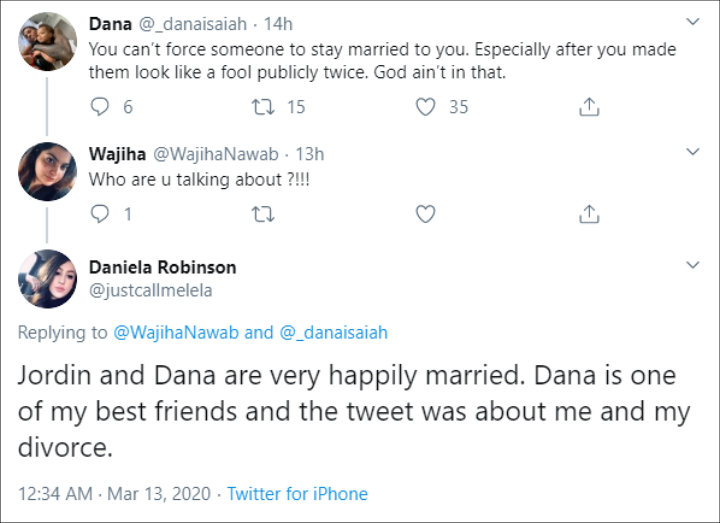 Fellow Twitter users quickly asked what he meant by that post and speculated if he was talking about his marriage to Sparks. A user by the name of Daniela Robinson, however, claimed that the post was actually about her as she noted, "Jordin and Dana are very happily married. Dana is one of my best friends and the tweet was about me and my divorce."