The former Miss Teen USA opens up about how she and her actor husband find time to get intimate despite their busy days, saying it happens when 'I'm in the shower and he's there and the kids are gone.'

AceShowbiz - Vanessa Minnillo a.k.a. Vanessa Lachey has gotten candid about the secret of her strong marriage to Nick Lachey. Having been married to the ex-member of 98 Degrees for nine years, the former Miss Teen USA credited shower sex for keeping their romance alive amid their busy schedules.

The 39-year-old was asked about her secrets to a long-lasting marriage during an interview on Nikki and Brie Bella's "The Bellas Podcast". In response, she was quick to point out, "Shower sex." She went on to dish, "So I'm in the shower and I'm like, 'I have a full day. You have a full day. It's either now or never.' The kids are at school. It happens and then later that night, if you get like the cherry on top, great. But if not, we already did shower sex."

On the reason why they relied on shower sex, the co-host of "Love is Blind" spilled in the Wednesday, March 11 episode, "I always say, 'Tomorrow wake me up.' And [Nick's] like you know that never works because I'm never a morning sex girl." She added, "I'm not. I'm sorry. I need to be late night, which is why I'm in the shower and he's there and the kids are gone…I say babe and he knows exactly."

Venessa's revelation prompted Nikki to confess she used to have sex in the shower with fiance Artem Chigvintsev. However, they "stopped" doing so because she thought they "need a bigger shower." To which, Vanessa advised, "If you tell Artem, 'I want to have sex with you in the shower so we need a bigger shower,' I have a feeling he'll be like Extreme Makeover. In 48 hours, you'll have a brand-new marble shower."

Vanessa and Nick have been friends since they worked at MTV. They began dating after she starred on his "What's Left of Me" music video in 2006, but briefly broke up in 2009. One year after getting back together, they announced their engagement. They tied the knot in the British Virgin Islands in 2011, and have since shared two sons, Phoenix Robert and Camden John, and a daughter, Brooklyn Elisabeth, together. 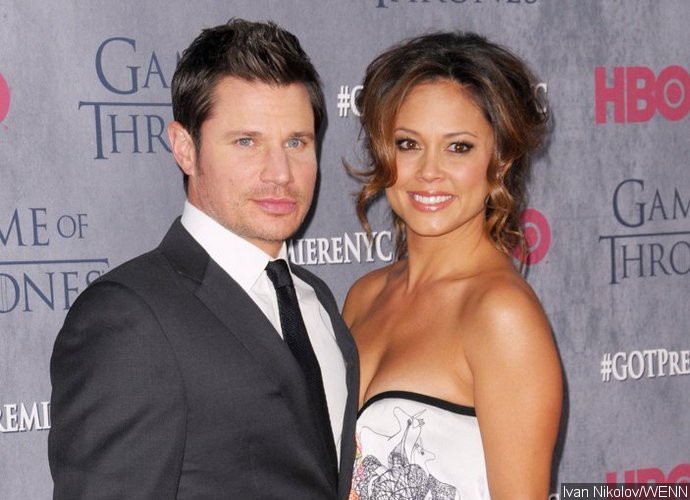