The 'One Night' rapper claims that those critics are 'so in denial with y'all masculinity' that they are bothered with him dressing up as a woman in the music video.

AceShowbiz - Lil Yachty has no regret about drag-dressing in his latest music video, which he released on Monday, March 9 for his new song "Oprah's Bank Account" featuring Drake and DaBaby. The 22-year-old star spoofs Oprah Winfrey in the clip, wearing a wig and a skirt.

While it was all done in good spirits and was supposed to be inducing laughter, some people on the Internet were apparently annoyed and slammed the "Minnesota" spitter for dressing up as a woman. "Lil Yachty fell off and now he gotta put on a dress to sell records," one person claimed after seeing the video.

Another commented, "@lilyachty in my opinion you don't need to wear no dresses or wings to sell ...you created a lane ... how I'm suppose to take this." Not remaining silent, Yatchy responded to the tweet, "B***h it's just supposed to be entertaining... it ain't even that deep, y'all N***a's so in denial with y'all masculinity s**t like this bother y'all.. Relax." 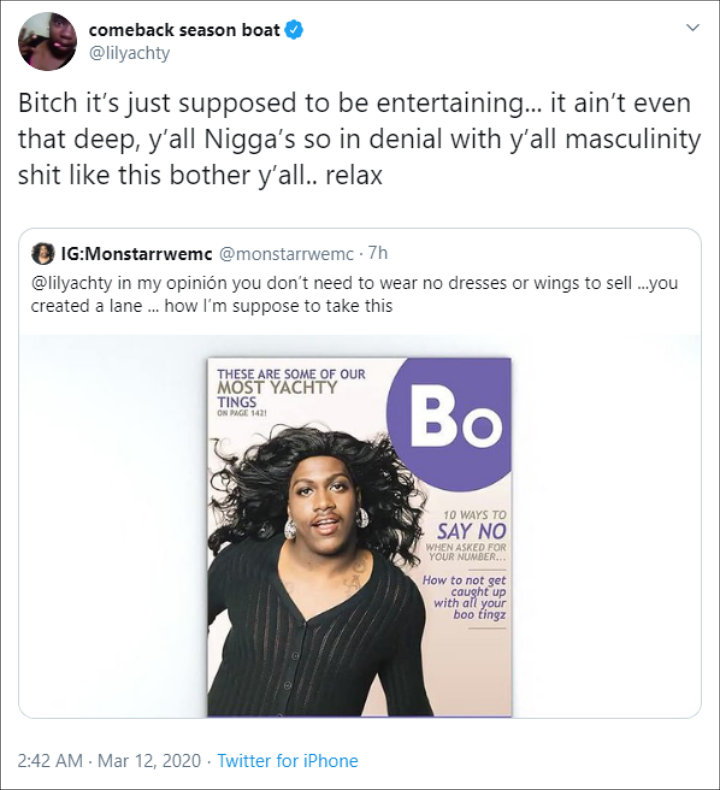 Lil Yachty responds to backlash after he dressed up as a woman in music video.
See also...

The Georgia-born artist also shared a tweet by a user who wrote, "You are Bi. Dressed up as a damn woman you done let the black community down." He responded with a meme of NBA player Russell Westbrook looking puzzled.

Agreeing with Yachty, one person wrote back to the critic, "If this bothers you, then it's your problem." Another chimed in, "ah yes i knew this was coming at some point lol men's masculinity be so fragile the insecurity literally leaps out."

Yachty, meanwhile, won't stop celebrating the release of the music video. He recently shared a Triller video of himself wearing the same outfit as he's in the music video while dancing to the song with Drake and DaBaby. "Idk how I got these two rich ass N***a's to do this @champagnepapi @dababy @trillervids," he captioned it.

The "Ice Tray" rapper also released a behind-the-scenes video on Monday showing his transformation into "Boprah Winfrey," a highly popular talk show host who interviews Drake and DaBaby, for the music video.

Hermes Decides to Scrap Spring Fashion Show Due to Coronavirus

'Riverdale' Suspends Production After Crew Member Got Exposed to Coronavirus

Lil Yachty Denies Being Arrested for Speeding: 'I'm Not In Jail'