The Footage sees the 'Welcome to the Party' rapper being taken out of the house on a stretcher and transported to the Cedars-Sinai Medical Center by fire fighters.

AceShowbiz - Footage of Pop Smoke being transported to hospital surfaced online following his tragic death Wednesday, February 19. The video was taken outside the rapper's house in the Hollywood Hills, California after he was gunned down in a home invasion.

The "Meet the Woo" star was taken into an awaiting ambulance on a stretcher. Before reaching the ambulance, one of the first responders was seen performing chest compressions and it continued once the rapper was settled inside the vehicle.

Smoke was taken to the Cedars-Sinai Medical Center and he was pronounced dead at the hospital. Hip-hop stars like 50 Cent, Nicki Minaj, Travis Scott (II), Snoop Dogg, Chance the Rapper, 2 Chainz, Ludacris, Nas, Meek Mill, and The Game paid tribute to the fallen star.

Initial reports claimed it was a robbery gone wrong but, according to the people who had seen the surveillance camera, it looked like a targeted hit because the men who broke into Smoke's house didn't seem to carry anything when they left after shooting the rapper.

The day before the incident, Smoke accidentally broadcast his address on social media. Rumor has it, the alarm was disabled by someone in the house. While the incident happened in the West Coast, the 911 call came from the East Coast.

His housemate Mike Durodola denied allegation he was involved in his murder, "I WOULD NEVER IN MY LIFE SET MY BROTHER UP, WE ATE TOGETHER , BROKE BREAD TOGETHER THIS REALLY MY MOTHER CHILD I DONT GOTTA EXPLAIN NOTHING TO NOBODY THAT DONT KNO ME BUT FOR THE ONES WHO KNOW ME KNOW WHEN YOU SAW ME YOU SAW POP."

Pop Smoke was known for his association with the Woo gang from Brooklyn. Soon after his passing, members of the rival gang the Cho ridiculed the slain rapper on social media. "Nighas saying dey outsideee [laugh]," one poked fun at him using lyrics to his song "Christopher Walking". 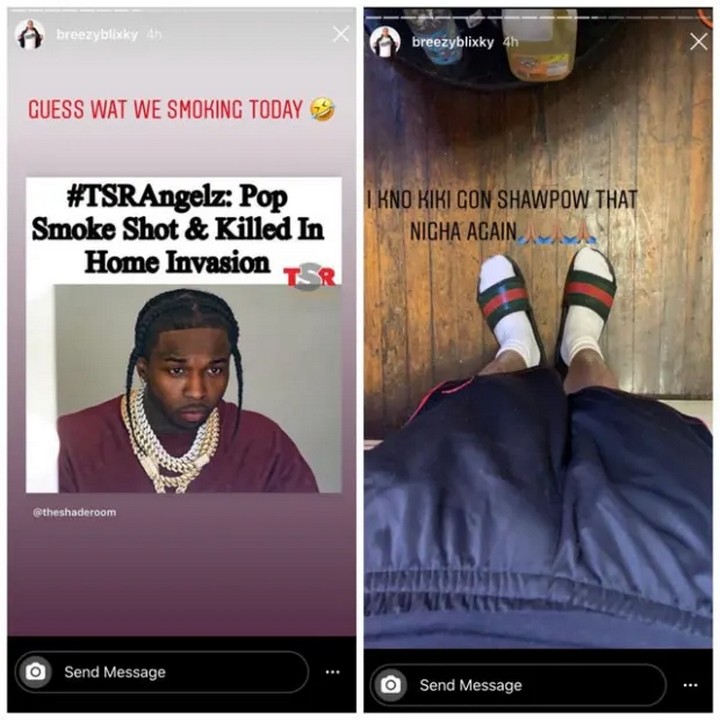 Another mocked, "I know Kiki is gonna shapow that n***a again," referring to an old video of the rapper getting beaten up by gang members. They said "shapow" every time they hit him in the video.