'This Is Us' Gains Praises Over Memorable 'Fat, Ancient and Gorgeous' Line

The latest episode of the hit NBC family drama melts viewers' hearts with a heartwarming scene between Kate (Chrissy Metz) and her mother Rebecca (Mandy Moore) that many deems empowering women.

AceShowbiz - "This Is Us" has become the talk of the town for all the right reasons. The hit NBC family drama aired an episode that saw Mandy Moore's Rebecca having one memorable conversation with Chrissy Metz's Kate on Tuesday, February 11, and many have deemed one particular line empowering women.

Titled "A Hell of a Week: Part Three", the episode saw the mother-daughter duo sharing some bonding time. Attending a weekend retreat for families who have blind children, Kate opened up to Rebecca about Toby and how she always needed him for even the small favors. She also confessed about her insecurity over wearing a bathing suit in public.

Upon hearing Kate's confession, Rebecca insisted they should go swimming. When her daughter declined, she was quick to point out, "You're fat, I'm ancient. We're gorgeous."

The inspiring scene has apparently tugged at the heart of many viewers since many turned to social media to applaud the powerful line. One Twitter user exclaimed, "This is now the best thing ever spoken by Rebecca!" Another stated, "Perhaps the best line ever written. If you wait until you are good enough, it will simply never happen." A third gushed, "We all got something but can't let it define us!!" 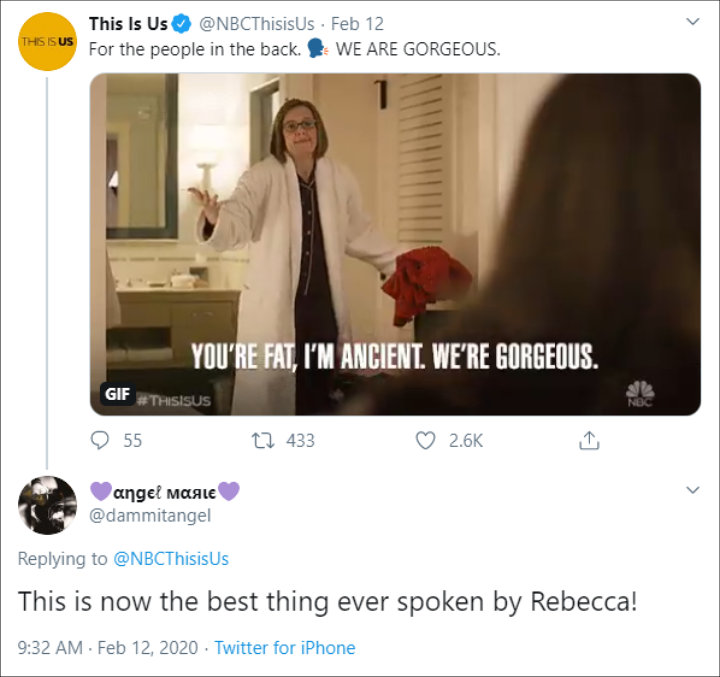 Another person praised "This Is Us."

One person got inspired by the quote.

It was not the only scene from the episode that has got people talking. At one point in the episode, Rebecca revealed she was diagnosed with mild cognitive impairment along with a memory loss problem. Still, she credited her issues for making her "feel more powerful." She added, "I'm more fun. Because I'm not sweating the small stuff. I don't know how much longer I have before things might get worse. I'm done being sad and I'm done feeling worried. I feel, feel okay."

Commenting on this heartwarming scene, a Twitter user wrote, "I love that the episode focused on the complicated relationship between Kate and Rebecca and how now they are finally in a better place. they finally sang together." Another confessed, "I cried when she said that." Others simply stated they "miss my mom" because of the scene, and called the episode "the best."

'DWTS' Recap: Find Out the First Couple Who Is Sent Home in Shocking Elimination

Ellen DeGeneres' Staff Not Impressed by Her Apology in Season Premiere

Liv Tyler Opts Out of '9-1-1: Lone Star' After One Season Over COVID-19 Travel Concerns

Teddi Mellencamp Likens Her Exit From 'RHOBH' to a 'Breakup'