The estranged husband of Teresa Giudice is caught on camera partying with bikini-clad babes and dancing seductively with one of them at a place called Isla Mujeres.

AceShowbiz - Joe Giudice doesn't seem to have any trouble moving on following his split from his longtime wife Teresa Giudice. The 47-year-old reality TV star has been spotted partying with some hot girls in bikini in Mexico.

The Italian businessman was spotted at a place called Isla Mujeres over the weekend. In a video obtained by TMZ, he was seen dancing seductively with a woman clad in an olive green bikini. He was also seen cozying up with a couple of girls under a cabana on the beach.

Joe appeared to be on a boys' trip as he recently posted on his Instagram account a video of him fishing on a boat. "Reverse on this!" he captioned it, with some hashtags "#fish #laugh #familytime."

Hours after the video of him partying with the bikini-clad ladies surfaced online, Joe posted but later deleted a public apology on Twitter. "I have learned about the bravery it takes to be in [the] public eye and how videos or comments can be 'insensitive and stupid, and I am deeply sorry for that,' " he wrote.

He continued, "Though, I am on a family trip with my uncle and friends! Girls were trying to dance with me at a hotel. I gave permission for individuals to dance close to me in which I'm sorry for my girls that witnessed it. My girls deserve me full time though I am not to be shamed for talking to humans. Sincerely, Joe #tmx #lovemy girls #brave #standup."

When one person commented on the post, "Watch ur back Joe. Some unscrupulous people out there," he replied, "yes I'm very faithful and going to wait." 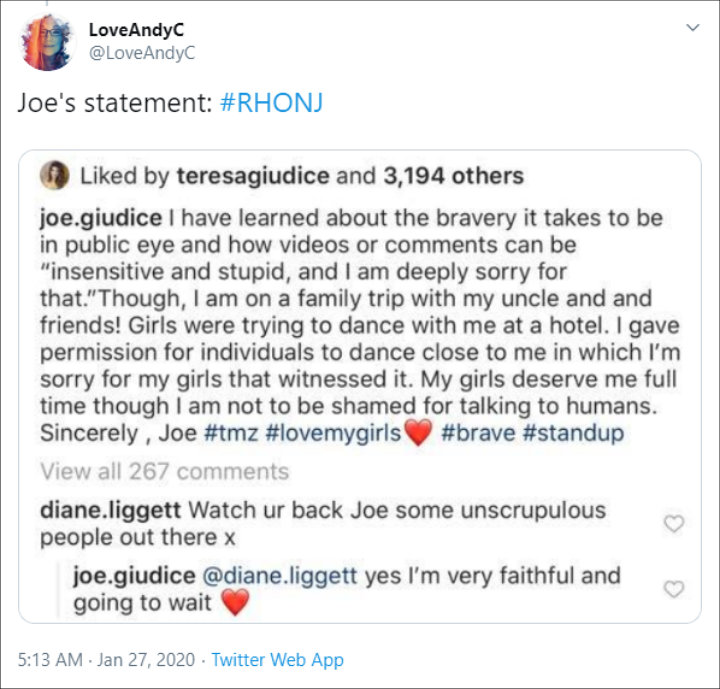 His estranged wife Teresa liked the post before it was removed from his account for an unknown reason.

Joe returned to Italy in late 2019 as he's waiting the final decision on his deportation appeal. Later in December, he confirmed that he and Teresa had broken up after 20 years of marriage. "It's Time To Let Go," he wrote with a link to an article about the split news.