Sara Molina continues to blast Jade after the latter calls the former out in a recent Instagram post intended to show Jade's support for her incarcerated boyfriend.

AceShowbiz - Tekashi a.k.a. 6ix9ine's baby mama Sara Molina isn't done clapping back at his current girlfriend Jade for dragging her in her recent Instagram post. Sara has accused Jade of being hooked on cocaine after the latter made rambling claims about the incarcerated rapper.

Taking to her Instagram Stories, Sara posted, "This b***h be having lockjaw like a motherf***er." She went on alleging, "Chill out on the coke ma." 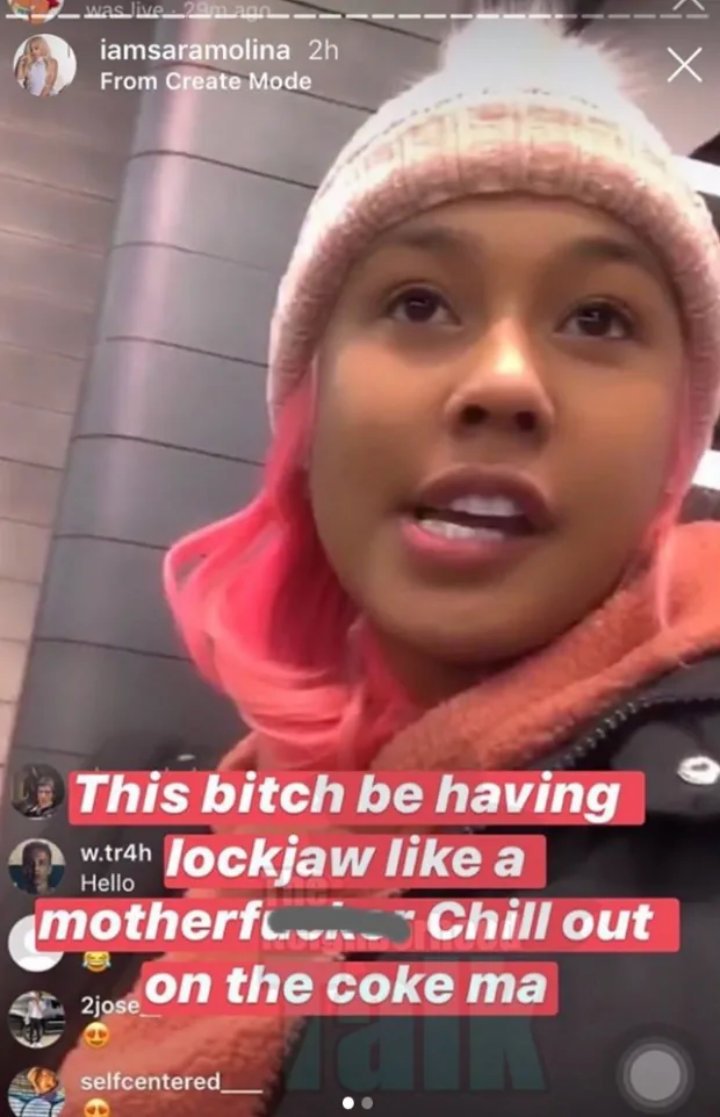 Sara didn't mention a name, but many believe it's directed at Jade, who previously accused her of sleeping with the same people who kidnapped 6ix9ine. "They kidnapped you , they had sex with the mother of your child , they get caught on the phone trying to kill you & their stealing millions of dollars from you," she wrote about the rapper's enemies in a Tuesday, January 21 post.

Protesting the punishment received by her boyfriend, Jade added, "Sammy the Bull kills 19 people and gets 5 years . You kill no one and gets 2 years . This s**t is so f***ed up .... LMFAOOO they can't break you , no one understands why people still love you and support you .13X PLATINUM 8X GOLD AND YOU HAD NO FRIENDS IN THIS INDUSTRY TO START OFF YOUR CAREER YOU TOLD EVERYONE SUCK YOUR D**K !!! THEY KNOW THE INTERNET HASN'T BEEN THE SAME SINCE YOU LEFT I LOVE YOU BABY #FREE You."

Sara quickly responded to Jade's diss, posting on Instagram Stories, "B***h don't mention me if you ain't gonna see me." Claiming that 6ix9ine cheated on Jade with his ex-girlfriends, Sara added, "You're weak asf, imagine sleeping with a n***a, while he sill with baby moms, ENDING UP WITH THE N***A, BUT YOU STILL MENTIONING ME FOR WHAT."

She also had some words to say about Jade's photo with the "Gummo" hitmaker taken behind the bars. "He not even hugging or kissing you boy like he's dying inside standing right next to you. You the only one that looks happy dummy," so Sarah claimed of the pair's awkward pose.