Having been a vocal critic of the 45th President, the '30 Rock' star turns his attention to the 'voters, particularly those who would re-elect him' when bemoaning the 'near moral collapse' of the country.

AceShowbiz - Alec Baldwin has hit out at supporters of U.S. President Donald Trump in a string of scathing tweets.

The actor has become well known for impersonating the businessman-turned-politician on sketch show "Saturday Night Live", and took to the social networking site as he bemoaned the "moral collapse" of the country and put the blame on those who backed Trump in 2016.

"American democracy has always been a struggle between the misaligned protections of specific freedoms and a raging, at times intoxicating, 12 cylinder economy. It demanded vigilant/consistent regulation, compassion for the disenfranchised and the periodic display of a necessary sacrifice that allowed for the long term health of our society at the expense of short term whims," the "Beetlejuice" actor wrote on Monday (January 13). "The desecration of those ideals and the near moral collapse of this country falls squarely in the lap of Trump's supporters... as opposed to Trump himself, who is merely what psychology labels the 'objective negative function.' "

He continued, "Like fire, floods and earthquakes, it destroys, and only destroys, by its very nature. Without prejudice. It is Trump voters, particularly those who would re-elect him who bear the blame. For the undeniable and colossal destruction of everything that matters to us as Americans that cannot be merely monetised." 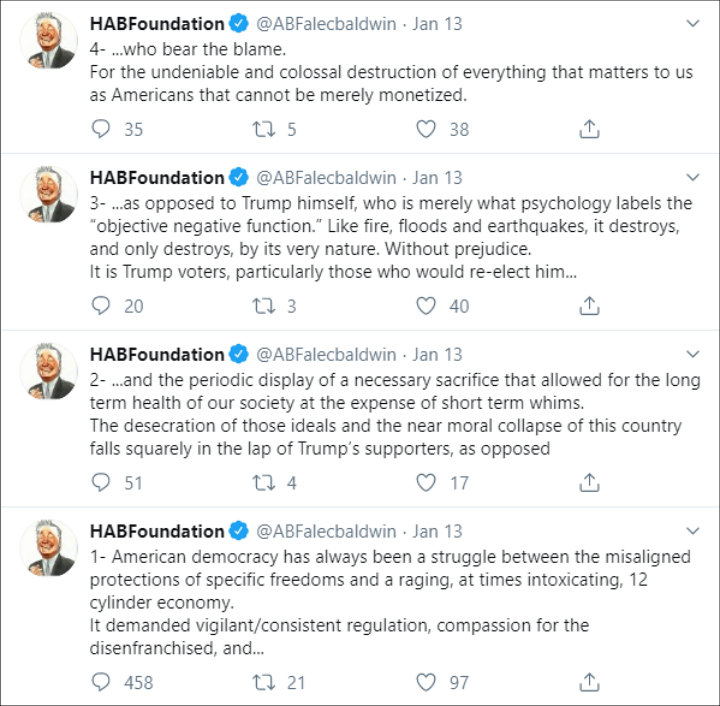 Alec Baldwin condemns Donald Trump's supporters for 'the near moral collapse' of America.

Baldwin previously suggested he was reluctant to return to the role as Trump, as he labelled the President "a threat to my safety and that of my family" after he wrote about the possibility of "retribution" for "SNL" and NBC bosses on his Twitter page early last year (19).