Denying that she married her new husband Michael Friedman on what would have been her 14th wedding anniversary with the late rocker, Talinda clarifies that she wed the firefighter on January 4 and not on January 1.

AceShowbiz - Chester Bennington's widow isn't trying to replace her fond memory of the late rocker with new one. Talinda Bennington has denied reports that she got remarried on what would have been her 14th wedding anniversary with the Linkin Park frontman.

TMZ previously reported that Talinda tied the knot with Los Angeles County firefighter Michael Friedman at Turtle Bay Resort in Kahuku, Hawaii around New Year's Eve. Sources allegedly close to the family told the site that the couple and their close ones had been hanging and celebrating at the resort in the days since their wedding.

However, Talinda has clarified that she wed her new husband on January 4 and not on January 1, which was her wedding date with Chester. Confirming the happy news, she posted on Twitter, "With joy and love I want to set something straight. ON JANUARY 4th, I wed a wonderful man, great friend, and son this weekend. We celebrated with all of our family and friends on the beautiful island of O'ahu. The day we chose was a day of meaning, in many different ways."

"My anniversary w/Chester, wasn't my new wedding date," she continued. "Jan 1st will always be the day I married Chester. I would never paint over that day with anything else." 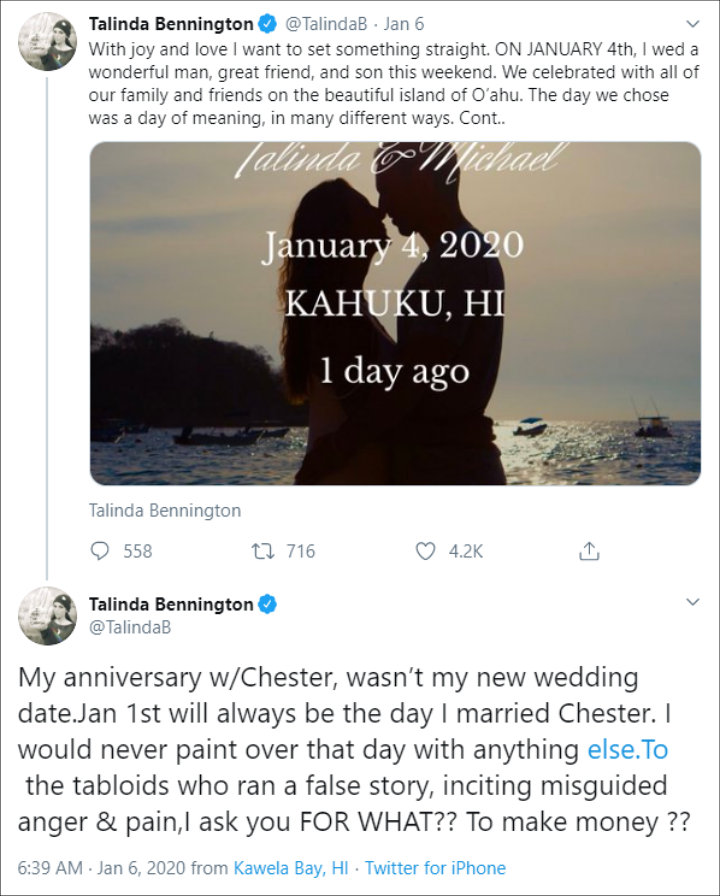 Slamming tabloids for reporting the false story, Talinda added, "To the tabloids who ran a false story, inciting misguided anger & pain,I ask you FOR WHAT?? To make money ?? To make money off of a false headline should be criminal. SHAME ON YOU @TMZ and any other that has repeated the story."

She additionally implored her followers to retweet her posts.

Talinda previously assured fans that she would continue to "honor Chester and continue my life's mission to make his passing not in vein (sic)" when announcing her engagement to Michael in September 2019. She and the late rocker had three children together, 13-year-old Tyler Lee and nine-year-old twins Lilly and Lila.