In the picture he shares on Twitter, the KISS frontman appears to mix two different types of cereal, Frosted Mini Wheats and Oreo O's, but that's not the thing that that catch people's attention.

AceShowbiz - Gene Simmons is sharing his cereal hack on Twitter. On Wednesday, January 1, the KISS frontman took to the micro-blogging site to post a picture of his breakfast goodness. However, the photo successfully shook the world of many foodies with his unconventional combination.

In the picture, Gene appeared to mix two different types of cereal, Frosted Mini Wheats and Oreo O's. However, the thing that caught people's attention was the fact that he put ice cubes in his cereal. "Anyone else put ice cubes in their cereal?" the 70-year-old star wrote in the caption. 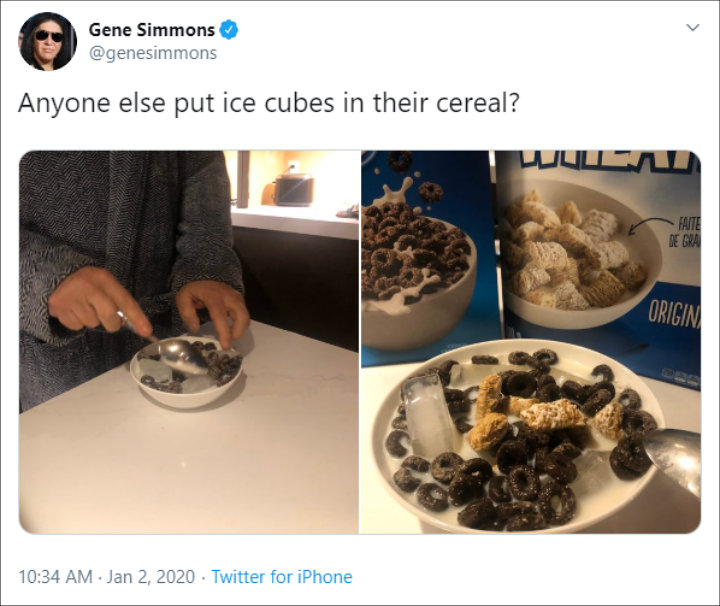 Fans were perplexed by the picture as one said, "Sorry @genesimmons I'm a HUGE @kiss fan but that's just wrong!" Another fan added, "Why does he want watered down milk? Yuck!" with someone else commenting, "He could just buy skim. I’m pretty sure it's the same thing."

"Why would I need to? It's a temperature controlling instrument and my milk stays in the damn fridge. Who the hell would want to eat watered down milk with their cereal ?" one other user wrote. "Absolutely not. Try chilling your bowl if you want that milk ice cold," one suggested.

"I'm literally wordless," one fan went speechless. "the mans got f***ing icebergs in his cereal," said another fan. "This man should be arrested for multiple charges including but not limited to: illegal use of ice cubes,reckless cereal mixing,use of a non-regulation sized bowl,conspiracy to pour milk before cereal," one comment read.

However, some fans took side of Gene. "Don't let this guy get to you, Gene. Food is personal. It’s the story of you. Don't ever let the haters write your story for you," the person said. Another user even related to Gene's post, writing, "IVE BEEN ON THE ICE IN CEREAL WAVE. ONLY THE ELITE KNOW."