Lori's former fiance Memphis Depay hangs out with Steve Harvey while she follows her rapper boyfriend to West Africa to support him at an upcoming concert in Nigeria.

AceShowbiz - It seemed Lori Harvey's ex Memphis Depay recently came to visit the Harveys. The 25-year-old Dutch footballer was seen hanging out with Lori's stepfather Steve Harvey. The athlete shared a picture with the 62-year-old comedian on Instagram. "Seen a lot, heard a lot, learned a lot," he wrote in the caption.

Lori, meanwhile, was out of the country, preventing any possible awkward run-in with her ex. She was in Africa with her current boyfriend Future. Despite rumors that they broke up, Lori flew to Lagos, Nigeria to support her rapper beau who was scheduled to headline a concert in the country on December 29.

Memphis was engaged to Lori in 2017. Steve gave his stamp of approval as he proudly shared a picture of the football player getting on one knee. Steve wrote on Twitter, "Marjorie [Lori's mother] and I are proud to announce the engagement of our youngest daughter Lori to Memphis Depay, this young man is a good one! Congrats!" 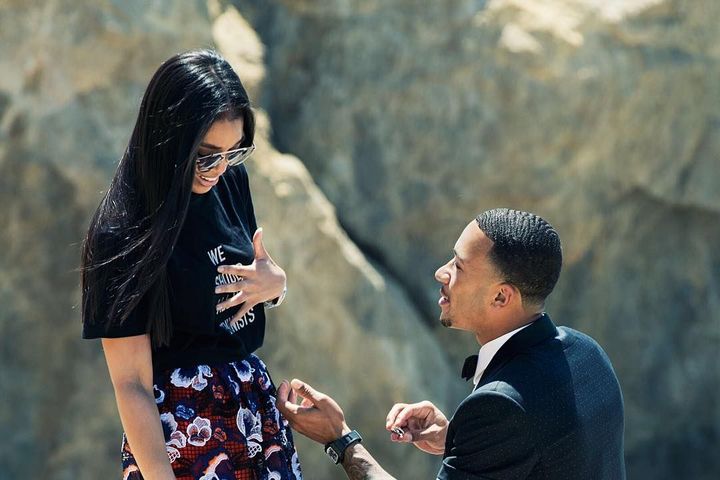 However, the newly-engaged couple was hit with split rumors only months later as she was seen cozying up to Trey Songz. She was even caught on camera attempting to hide from paparazzi while she was in the singer's car. Future joked back then, "You ducked too late. I see you. I like that, it's cute. Keep it up." Meanwhile, Memphis commented, "Gods [sic] plan isn't always easy."

Lori and Future were romantically linked earlier this year. They never directly addressed their relationship but they kept popping up at the same events. While her family welcomed Memphis with open arms, it's seemingly not the case with Future who is notorious for having a string of baby mamas and their dramas.

In a 2015 video, Marjorie Harvey even warned Lori not to date any rappers. "When it comes to dating, my mom has nothing to worry about," Lori assured her mom back then. "I've got this."