The 'Nashville' alum shows off her new pixie cut, which is inspired by her 'Scream 4' character, in the first photo she posts on her Twitter account in 10 months.

AceShowbiz - Hayden Panettiere has made a dramatic return to social media. Ten months after she last posted on Twitter, the Juliette Barnes of CMT's "Nashville" treated her followers to a full view of her new "radical" look.

On Tuesday, December 10, the 30-year-old actress uploaded a selfie photo that showed off her fresh pixie cut. "Channeling my inner #Kirby #Scream4," she pointed out how her new hairdo mirrored that of her "Scream 4" character, Kirby Reed. She went on to tag her hairdresser as she wrote, "Thanks to my boys @anthonyleonard." 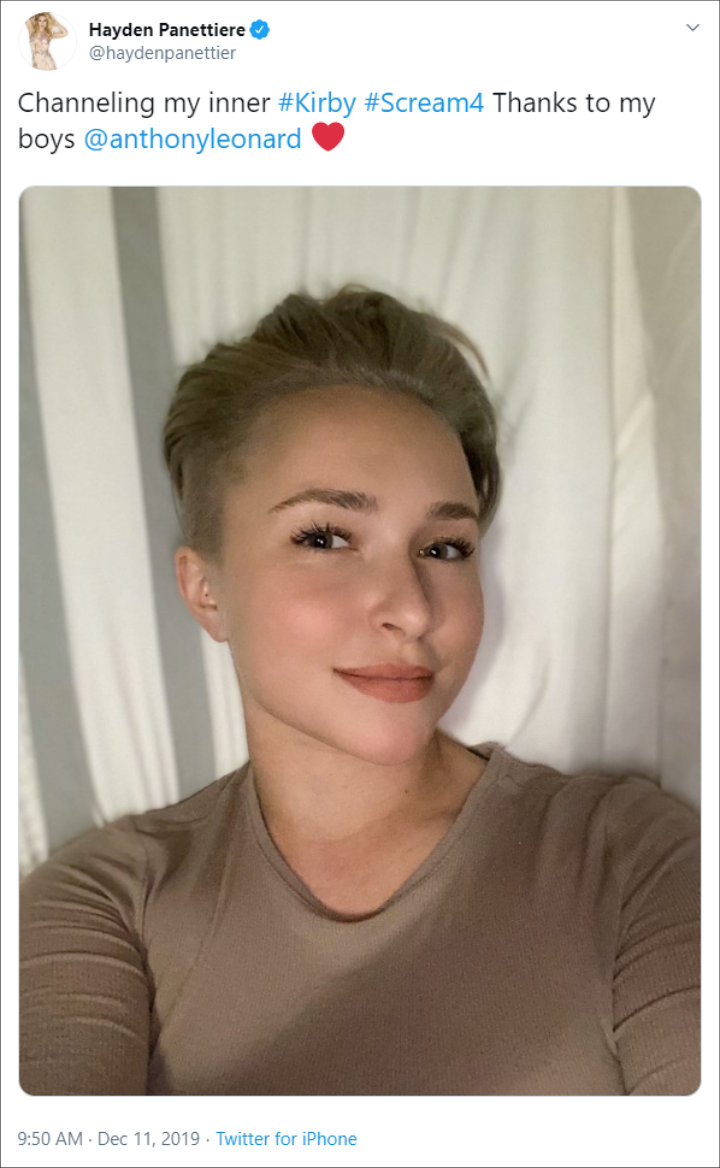 Hayden Panettiere showed off her 'radical' look on Twitter.

Speaking about Hayden's new look, hair guru Leonard Zagami told E! News that the former "Heroes" star "was looking for a radical change." He detailed, "Last night we just went for it! It's a modern version of a classic pixie style with a little more of an edge. The color is silver, but not grey. She had previously been going with a super sexy blonde."

Leonard additionally noted that the cut "was a collaborative idea." He explained, "She has wanted to go short for a while but she has always had a commitment with her work and wasn't able to. Right now, she is free and said, let's do it!"

Hayden's new do post has since sparked a frenzy among "Scream" fans. Many believed it was a hint that her character, who was killed in the horror franchise's fourth installment, is still alive. "I'm just gonna take this as confirmation Kirby is coming back for Scream 5," one Twitter user commented. Another one spouted, "Legend! yes KIRBY IS STILL ALIVE! we been knew."

Hayden herself has shied away from social media since late February 2019. Months later, news broke out that her boyfriend, Brian Hickerson, was arrested amid allegations of domestic violence. In September, the charge against Brian was dropped due to a lack of witnesses and a restraining order against him was lifted. She and the real estate agent were spotted back together in November.