On 'The Invitation', which features Suge Knight, the former 'America's Got Talent' host can be heard rapping, 'I heard your chauffeur got a video of you sucking a c**k.'

AceShowbiz - Nick Cannon has once again hit back at Eminem for dissing him on Fat Joe's "Lord Above". This time around, the TV host used his music to attack the Detroit rapper and even got Suge Knight to help him out. Titled "The Invitation", the song was released on Monday, December 9.

Nick doesn't mince his words on the song, taking aim at Em's notorious family with a verse that compares him to Drake. "Somebody get Hailey and that other kid you raising that ain't even your baby," he raps, referring to Em's adopted daughter Whitney. "Took a page out of Drake book, this might get a Grammy/ We going back to back until you respond on the family."

Not stopping there, Nick also says that Mariah Carey "killed you off a decade ago/ You still crying about it b***h, now who really the h**." For those who don't remember, Mariah once released a song titled "Obsessed", which she recorded as a response to Eminem's claims of a relationship with her.

The scathing lines apparently aren't the ones that get Nick in trouble. Instead, it's the part where "The Masked Singer" host raps, "I heard your chauffeur got a video of you sucking a c**k/ You paid him off then laid him off, now who really the opps." Following the release of the song, Nick said on Twitter that he got a call from Em's lawyers because the rapper apparently wasn't too pleased about that lines.

He said on the micro-blogging site, "FACTS! His lawyers didn't want that one out! They already on my line." 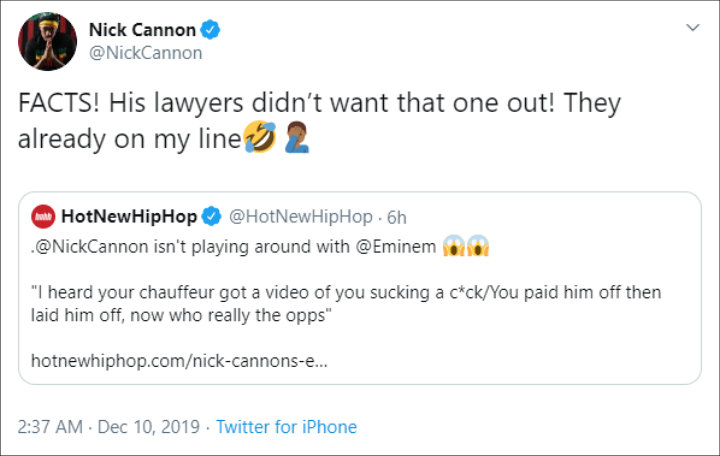 Nick Cannon said he got a call from Eminem's lawyers.

Nick and Em's beef was reignited after the latter dissed both Nick and Mariah on Fat Joe's "Lord Above". In response to the beef, the former "America's Got Talent" host called Em an old man and invited him to his MTV show "Wild 'N Out" so that he could beat him.

Suspended Grammys Chief Says Nominations Were Rigged and She Has Evidence

Madonna Calls Off Another Lisbon Show Due to 'Ongoing Injuries'

Eminem Unapologetic About His Controversial Album: It Was Made to 'Shock' People