For the occasion that takes place in New York City, the 'On the Basis of Sex' actress covers her baby bump in a black velvet gown that features statement white bows on the shoulders.

AceShowbiz - Congratulations are in order for Felicity Jones. The actress is soon to be entering motherhood as she is currently expecting her first child with husband Charles Guard. A representative for Felicity confirmed the happy news to PEOPLE on Wednesday, December 4.

Felicity debuted her tiny baby bump when she attended the premiere of her movie "The Aeronauts" in New York City. For the occasion, the "On the Basis of Sex" actress covered her baby bump in a black velvet gown that featured statement white bows on the shoulders and dramatic puffed sleeves. Joined by her co-star Eddie Redmayne, she styled her brunette hair into a neat updo. 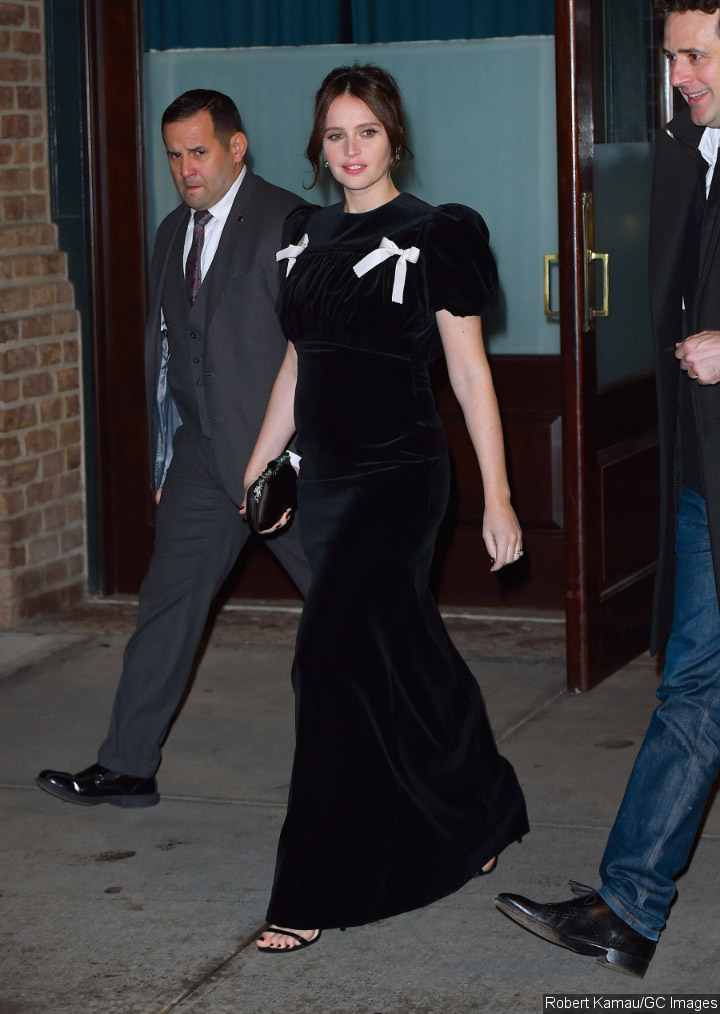 This is surely a good news for Felicity. After all, she previously gushed over how having children may positively impact her career. "Fortunately, I feel like we're in a new era, where it is empowering rather than limiting to have children," she said in an interview at the time. "From what I can see from friends and relatives, women get stronger and more decisive from having children, they don't waste their time doing things they don't want to."

Felicity married Charles Guard, whom she started dating in 2015, in June 2018 in a romantic ceremony at Sudeley Castle in Costwold, Oxfordshire in England. For her wedding, the "Rogue One: A Star Wars Story" star wore custom-made Erdem couture gown that featured bone corset detailing and a grosgrain bow. She told Vanity Fair that her favorite part of the dress were the buttons at the back as well as the embroidered trellis cuffs.

Unlike most celebrities, Felicity has been fairly quite about her relationship and has never spoken about it publicly, and this is not without reason. In a 2016 interview, she said that this is partially because she wants people who see her movies to be able to get fully invested without thinking about her as an actress. "When I go to cinema, the less I know about the person, the more I can invest in them as characters," she said at the time.

Cardi B Suggests Offset Has the Right to Cheat on Her: 'Look How I Look!'

Felicity Jones Has Given Birth to Her First Child