A spokesperson for the airlines has issued a statement acknowledging that content well within their guidelines was unnecessarily excluded from both 'Booksmart' and 'Rocketman'.

The actress-turned-filmmaker was shocked to learn a pivotal lesbian sex scene and a mention of the word "vagina" had been cut from the movie for a recent in-flight screening, while the word "f**k" was not removed.

She vented about the censored movie in a series of social media posts, and urged airline officials to cut ties with representatives at a third party company who censor films shown in the air.

Her plea has since been heard by Delta executives, who have promised to make it right - for both "Booksmart" and Elton John biopic "Rocketman", which features gay love scenes.

In a statement issued to The Hollywood Reporter, Delta spokesperson Emma Protis said, "We are immediately putting a new process in place for managing content available through Delta's in-flight entertainment."

"Studios often provide videos in two forms: a theatrical, original version and an edited version. We selected the edited version and now realize content well within our guidelines was unnecessarily excluded from both films. We are working to make sure this doesn't happen again."

Protis also revealed that studio chiefs behind the two projects were providing Delta with their own special cuts of the movies. 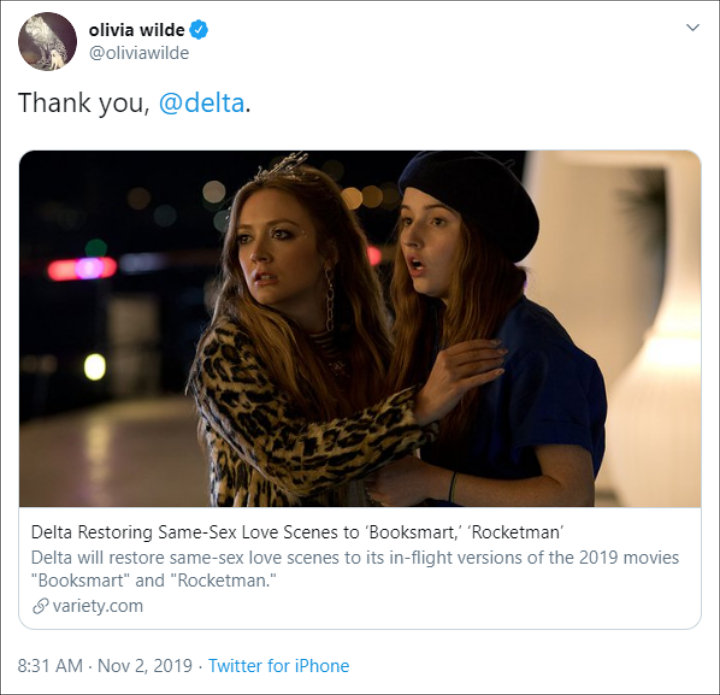 Responding to the development, Wilde took to Twitter to write, "Thank you, @delta".