In a series of tweets about the heavy editing of her teen comedy film, the 'Life Itself' actress expresses her disbelief that the word 'vagina' was cut out while a curse word 'f**k' was left untouched.

AceShowbiz - Olivia Wilde has urged all airlines to cut ties with the bosses of a third party company who censor films shown on flights after discovering her movie "Booksmart" had been heavily edited for passengers.

The actress and director was shocked to learn a pivotal lesbian sex scene and a mention of the word "vagina" were cut from the film for a recent flight screening, while the word "f**k" was not removed.

Wilde has since seen the edited version of her film and she's upset the powers that be saw fit to cut her movie even though it opens with a parental guidance disclaimer.

"I finally had the chance to watch an edited version of Booksmart on a flight to see exactly what had been censored," Wilde tweets. "Turns out some airlines work with a third party company that edits the movie based on what they deem inappropriate. Which, in our case, is... female sexuality?".

Olivia adds: "They cut the second half of the animated doll sequence - because naked doll bodies - made for children - are too shocking even with no genitals. Speaking of which, they cut the word 'genitals'. Most disappointingly, they cut most of Amy and Hope's love scene in the bathroom, which involves zero nudity, but does involve an essential plot point for a lead character."

"By the way, they didn't cut ANY cursing. Every 'f**k' is heard loud and clear, sometimes in the same scene where they muted 'vagina'. They showed (character) George (elegantly) deep-throating a microphone but couldn't stomach a consensual love scene between two women."

"What message is this sending to viewers and especially to women? That their bodies are obscene? That their sexuality is shameful? I urge every airline, especially those who pride themselves on inclusivity, to stop working with this third party company, and trust the parental advisory warning to allow viewers to opt out if they choose." 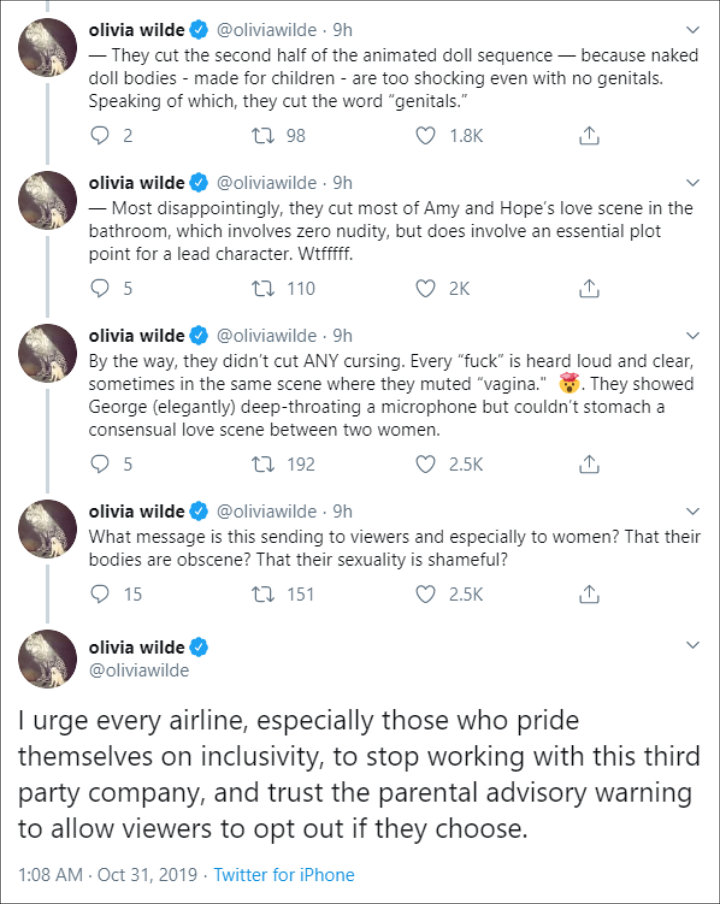 Beanie Feldstein and Kaitlyn Dever, who starred in the film, have also spoken out about the cuts - Feldstein tweeted: "We're on the case to get this rectified. Our movie is a beautiful representation of the queer experience as young people. I'm a queer person. So we're getting to the bottom of it, don't worry."

Kaitlyn called the controversy "ridiculous", adding: "I don't even know what to say to that. That makes me so mad."