The former 'House M.D.' actress has been alerted about the editing out of an intimate scene in her coming-of-age film by a fan who watched the movie on a flight.

AceShowbiz - Olivia Wilde is seeking answers after learning an unspecified airline has edited out an intimate same-sex scene from her film "Booksmart".

The actress-turned-director was alerted to the missing footage, which features two female characters having sex, when a fan recently watched the film on a flight and noted something was lacking.

"Tried watching 'Booksmart' on the plane and they cut the ENTIRE lesbian hookup scene like not even a KISS was allowed! oh but don't worry guys, the Straights got their kiss," the devotee, Michaela Barton, tweeted, prompting Olivia to respond: "This is truly a bummer. There is no nudity in this scene. What makes it too obscene for airplane viewing? What airline?" 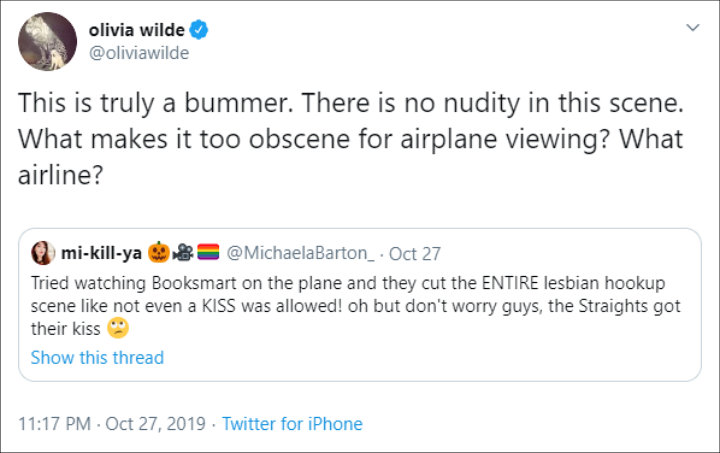 She then added: "I don't understand it. There's censorship airline to airline of films. There must be some kind of governing board to determine."

"We rated a certain way. If it's not X rated, surely it's acceptable on an airplane. There's insane violence of bodies being ripped in half and yet a love scene between two women is censored from the film. It's such an integral part of the character's journey. My heart just broke. I don't understand it. It's confusing."