Hitting back at a user who accuses her of being jealous of Tiny, Asia'h Epperson stresses how she at least is in a relationship with 'a man that actually loves me and doesn't cheat on me.'

AceShowbiz - It's been more than a year since Asia'h Epperson made headlines over her alleged affair with T.I., but it looks like the drama is still very much on her mind. When one Instagram user accused her of being jealous of Tip's wife Tiny a.k.a. Tameka Cottle because she has "better position" than her, the actress was quick to hit back as she also took the time to throw major shade at the songstress in the process.

Calling the troll a "poor example of how real black women are supposed to be with one other," Asia'h clapped back, "I am soooo much in love!! I have been for years now!! (Shows how much you really know) lol!" She then talked about her boyfriend, who "loves me very much!! And I love him very much!!! We are #blacklove."

Asia'h added in another post, "Oh is her position better than mine??? Lol! I'm young!! No kids!! In the beginning of my blossoming career!! And I'm actually in love!! In a real relationship!! With a man that actually loves me and doesn't cheat on me!!! Lol!! Naw honey!!! I'm good with the life and position I have!!!!" 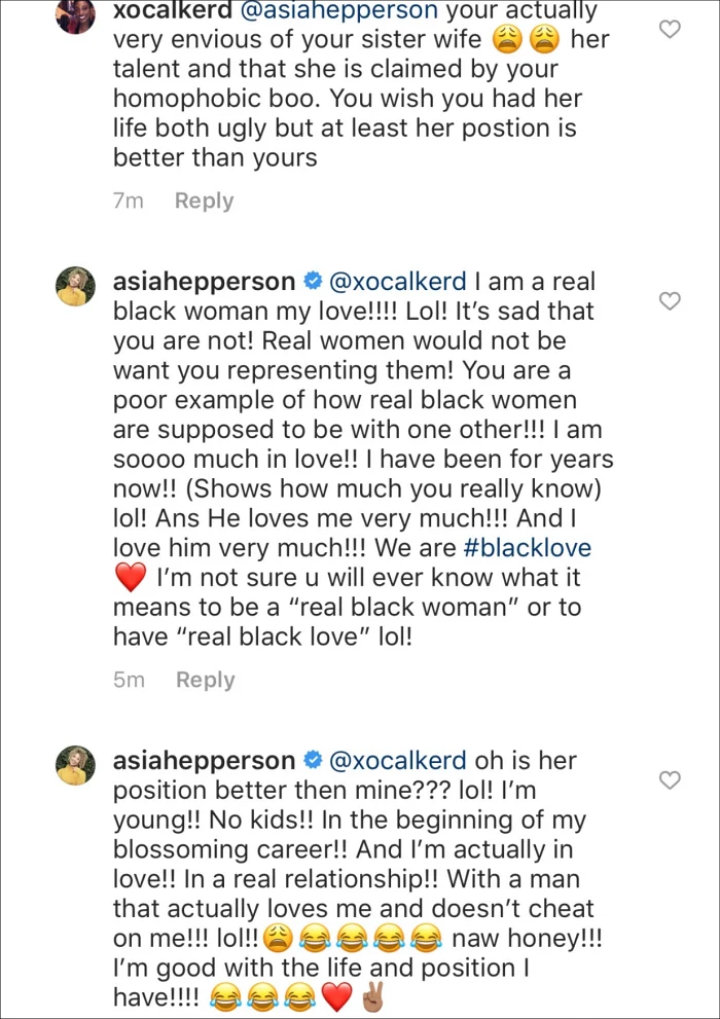 Last year, Asia'h was heavily suspected to be the girl whose booty was slapped by Tip in a video. This prompted Tiny and Tip to get into a huge fight, which was captured on "T.I. & Tiny: The Family Hustle" Tiny told her husband at the time, "You should not be grabbing on nobody's a**. I care about the cheating and the disrespect." Tip ultimately admitted his mistake and apologized, though Tiny didn't immediately allow him to move back in.

Meanwhile, Asia'h responded to the rumors by saying, "Take it from me, don't be caged by the opinions of others. Stay true to yourself and stand tall above the bulls**t."