Pointing out how men can quickly move on with new women without receiving backlash, the songstress says, 'If our president can ' grab em by the p***y...' can't I just have a kiss and acai bowl?!?!?'

AceShowbiz - Not everyone was thrilled to see Miley Cyrus making out with Cody Simpson, especially when she had just broken up with two people. However, the former Disney darling felt there was nothing wrong about that and hit back at those who criticized her for moving on too fast.

Miley took to Twitter on Friday, October 4 to address the backlash, noting how she understood why people feel so entitled over her life given that she had been in the spotlight since she was a teenager. But the singer reminded them that she's now a grown-up woman who makes choices after much consideration. She also pointed out that she would not be receiving this kind of treatment if she were a man. 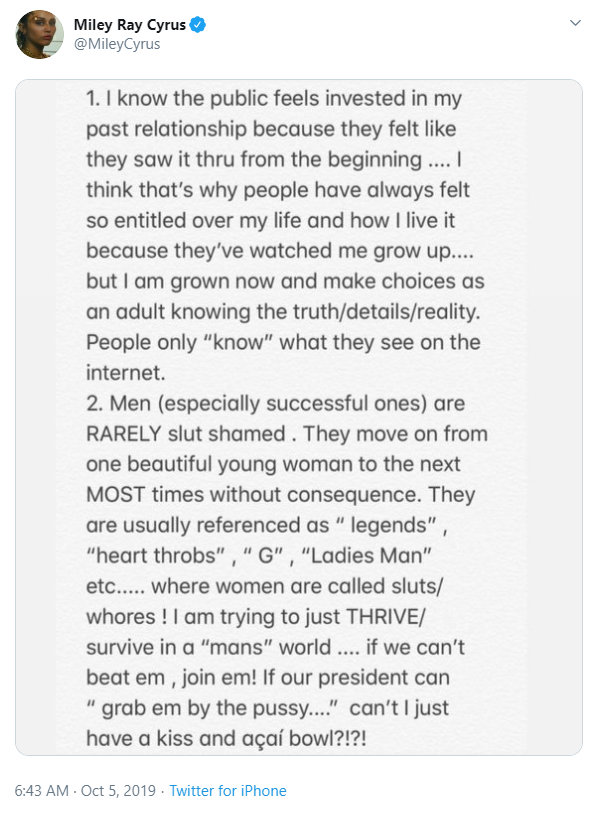 Miley Cyrus hit back at those who said she moved on too fast.

In another post, Miley stressed that she refused to keep her romance life lowkey and date from home because she "would like to share an activity with someone I am dating and not be stuck at home with pretty much nothing to do but 'Netflix and chill.' " She then admitted to feeling not used to dating life just yet due to her longtime relationship with ex-husband Liam Hemsworth. Miley said, "Don't f***ing pity me, not what I'm asking for."

The "Wrecking Ball" singer concluded her post, "I have a great life I wouldn't trade for ' privacy' but PLEASE don't make this awkward for me! I am trying to make light and like always MAKE FUN of myself / and the public's perception of me ! Get used to me dating - this is where I am at !" 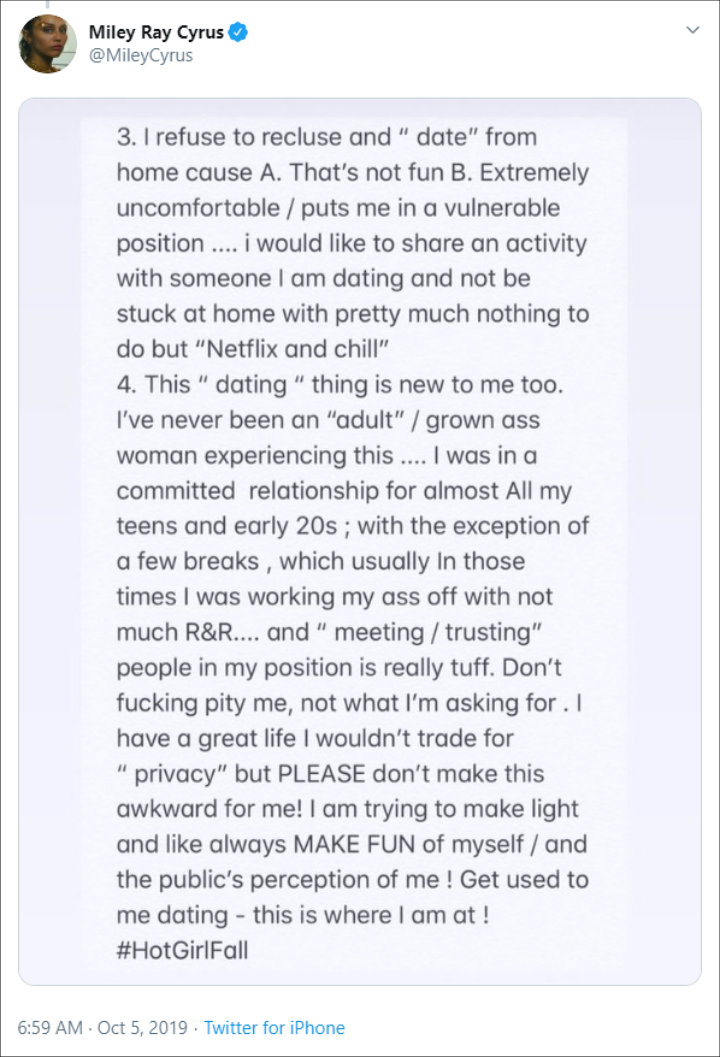 This arrived just a day after she was spotted making out with longtime friend Cody at Backyard Bowls in Los Angeles. The pair were also said to be sharing a quick kiss when they stopped by a grocery in the city. Addressing their makeout session on Instagram Stories, Miley wrote, "Can a girl not get a f***ing acai bowl and a morning make out session in peace ?!?!"

She later posted a shirtless picture of Cody and declared he's her type. The "Slide Away" singer wrote along with the photo, "22, Australian (my type), abs."

These Then-Child Stars Have the Biggest Transformation Ever