The 'Hobbs & Shaw' actor records a video of him singing Happy Birthday and wishing super fan Marie Grover the very best after Jamie Klingler reached out to him via Twitter.

AceShowbiz - Dwayne Johnson a.k.a. The Rock made a super fan's 100th birthday celebrations extra special when he sent her a personalised congratulations video.

Jamie Klingler reached out to the wrestler-turned-movie action man via Twitter and asked him if he could wish her best friend's grandmother, Marie Grover, a happy birthday - and he was happy to oblige.

Dwayne tweeted back: "Who's turning 100? Beautiful age! What do you need, Jamie?" 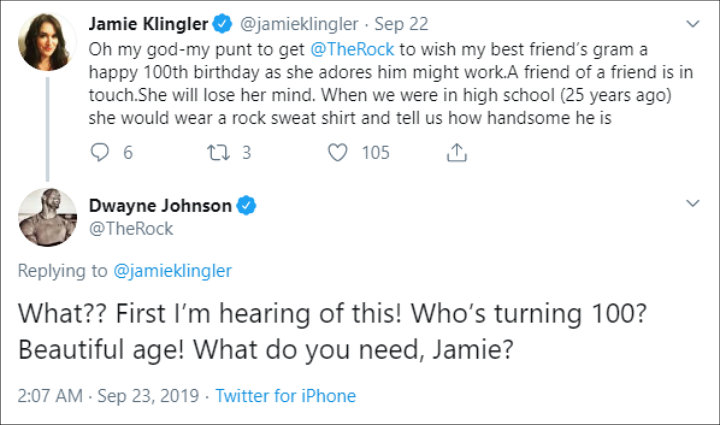 The Rock offered help to congratulate a fan's grandmother for her 100th birthday.

He then recorded a special video for the birthday girl, singing Happy Birthday and wishing her the very best.

Klingler, who shared the video and Grover's reaction on Wednesday (October 02), wrote: "Happy 100th birthday to Grandmom Grover, I cannot begin to thank @TheRock enough for making this happen."

Jamie previously explained a friend of a friend had put her in contact with Johnson, adding: "Oh my god - my punt to get @TheRock to wish my best friend's gram a happy 100th birthday as she adores him might work. A friend of a friend is in touch. She will lose her mind. When we were in high school (25 years ago) she would wear a rock (Johnson) sweat shirt and tell us how handsome he is."

The thrilled gran sat in stunned silence as Dwayne said, "You can eat cake, you can get drunk. Party hard. I'm sending you so much love."