Some fellow passengers have disputed the Danity Kane member's claims of disrespectful treatment from the flight attendant, with one saying that the 'attendant was nothing but helpful and informative.'

AceShowbiz - Aubrey O'Day's claims of being told to undress in front of the rest of the plane have backfired. The singer is accused of lying after taking to Twitter to call out a male flight attendant who allegedly forced her to take off her shirt before allowing her to fly.

The Danity Kane member blasted the flight attendant and American Airlines on Thursday, September 26. She tweeted, "never have I flown & had the steward treat me like a punished lil child in timeout the entire flight.. including making me undress in front of the entire plane because he didn't like my shirt & made me turn inside out in order to fly. @AmericanAir." She named the flight attendant, adding, "JAMES RUSSO NEEDS TO BE FIRED."

When a Twitter user expressed his sympathy to Aubrey, she went on sharing, "yeah. I was SHOCKED. I literally had to have my breasts in a bra out in front of everyone around me in order to not get kicked off. The girl next to me held up her blanket cuz she felt bad." 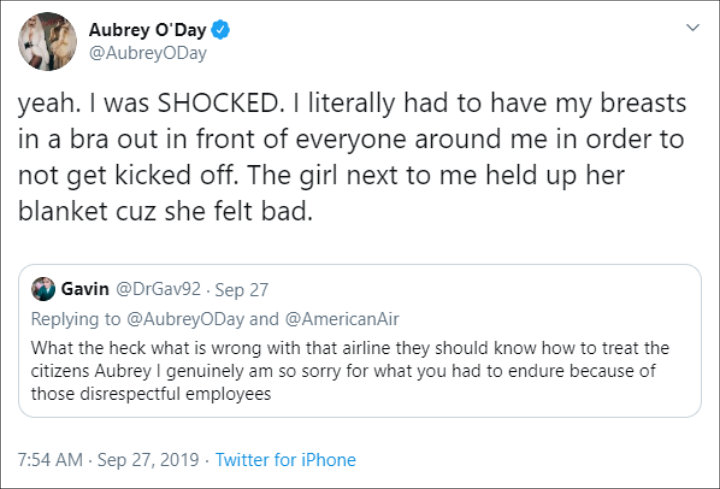 The airline took notice of her complaint, writing to the star, "@AubreyODay Please send a DM with your flight info and a quick follow. Your comments concern us and we'd like to check into this further." Aubrey then replied, "I gave you his name. I literally have no interest in dealing with your airline any further. I'm that offended and disturbed. I wish I took @JetBlue." 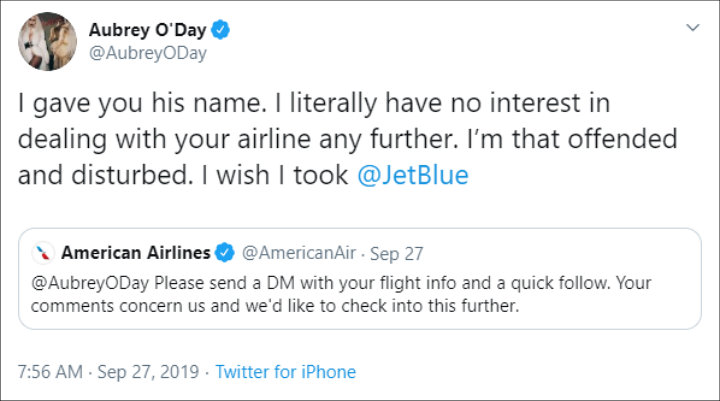 She continued whining in another post, "the state of free speech is under attack. And in this case, their power to do so wasn't even used equally or with appropriateness. can't imagine my shirt was more offensive than my breasts being out on the plane." 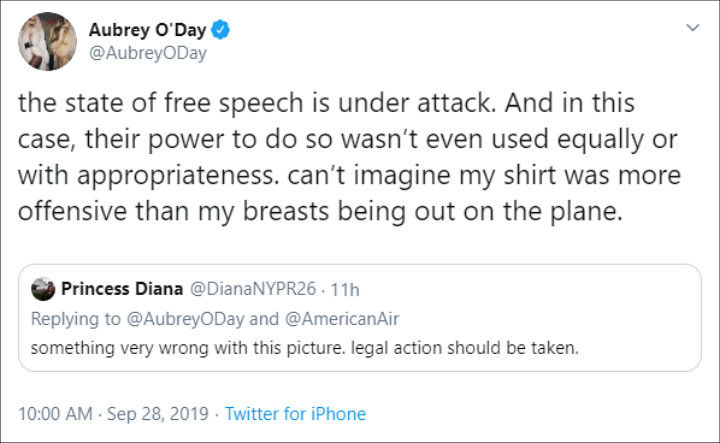 Though she was offended by the male flight attendant's treatment, she didn't think that he's a pervert. "I didn't get pervert vibes. I got someone that I feel genuinely hated me," she explained, "he wasn't kind. and I don't believe his feelings were handled correctly."

However, alleged eyewitnesses have disputed Aubrey's account of the event, accusing her of lying to gain attention. According to someone who claimed to be on the same flight with the 35-year-old singer, the "attendant was nothing but helpful & informative."

Another wrote, "Already heard on the radio news this morning that her story about this is 100% FALSE!!! She is a fraud!!! She was told to go to the bathroom. She wants her moment of fame but truth is out now. She is lying!!!!"

Aubrey has not responded to the accusations that she's lying. Meanwhile, American Airlines spokeswoman Whitney Zastrow has said the airline is "reviewing the situation, and have reached out to Ms. O'Day to get more information."